The Arts of the Sikh Kingdoms 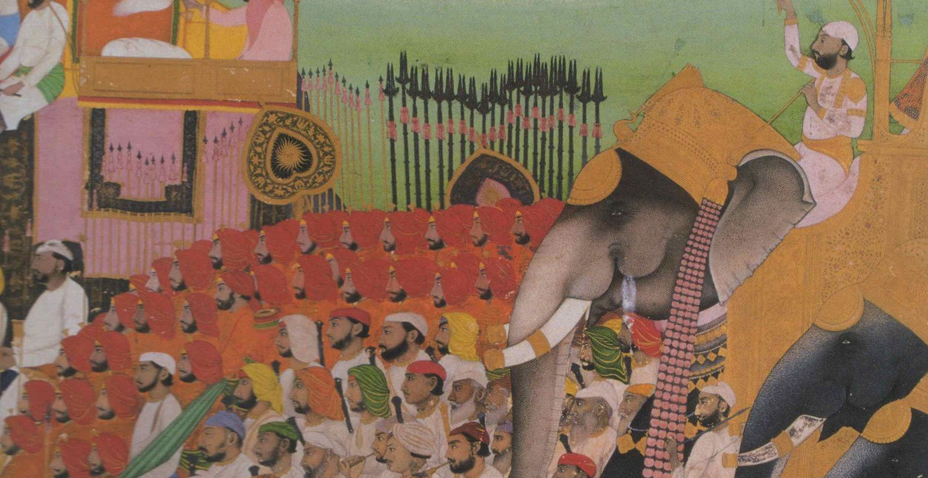 This V&A exhibition, shown from 25 March to 25 July 1999, marked one of the most important anniversaries in Sikh history: the creation in March 1699 of a new order called the Khalsa, or ‘the pure’. Millions of Sikhs all over the world today are still identifed by the visual symbols adopted 300 years ago, including the uncut hair that men cover with a turban, as well as by standard surnames, Kaur or ‘princess’ for women, and Singh or ‘lion’ for men, introduced at the same time.

An exhibition with a religious theme might seem the obvious choice for this seminal anniversary, but was ruled out by Sikhism’s rejection of religious iconography. There is no Sikh sculpture, and the holy book has a sanctified status making it a wholly inappropriate exhibit. There are no contemporary portraits of the ten Sikh Gurus, and the predominantly 19th century depictions of them vary in quality.

Thus, a different theme was chosen, and the historic V&A collections, inevitably the core of the exhibition, led naturally to the cosmopolitan court of the first Sikh Maharaja of the Panjab, Ranjit Singh (r. 1801-39). The court was the most magnificent in the subcontinent at the time, and was also characterised by its religious tolerance, with Hindus, Muslims, Sikhs and Europeans all holding high office.

This rich diversity meant an unusual approach had to be taken in presenting the wide range of material. It is almost impossible to define an exclusively ‘Sikh’ art – the maharaja’s famous golden throne, for example, was made by a Muslim, and even paintings of Sikh subjects could be the work of Hindu, Muslim or Sikh artists. The exhibition therefore tells the fascinating, but surprisingly little-known story of the cultural history of the Sikhs through works of art.

The opening section briefly explains Sikhism (through miniatures, 19th century photographs of the Golden Temple, illustrated manuscripts and coins) and then explores the artistic heritage of the region now divided between India and Pakistan: the great Mughal tradition centred on Lahore, and the vividly distinctive schools of painting in the Hindu kingdoms of the Panjab Hills.

The comprehensive view of Ranjit Singh’s court which follows includes paintings of leading personalities, some of the maharaja’s most treasured possessions (including spectacular jewels), and pieces from the Sikh armoury, including the idiosyncratic turban helmets. Ranjit Singh hired former Napoleonic generals to reorganise his army on European lines, and they commissioned paintings from local artists as well as shawls from the weavers of Kashmir, part of the Sikh kingdom from 1819.

After the great ruler’s death, a decade of upheaval and war culminated in the British annexation of the Panjab in 1849. The boy maharaja, Dalip Singh, was deposed and came to England where he was painted by Winterhalter and photographed by the Royal Family. Despite the problems suffered by the region, the arts of the Panjab survived. Throughout the first half of the 19th century the Lahore court had patronised silk weavers, embroiderers, metalworkers and wood carvers at their various centres, and provided a market for the work of artists from all over the Panjab. After annexation, the rulers of the smaller remaining Sikh kingdoms, notably Patiala, ensured the survival of these traditions into the 20th century.

Part of this first international exhibition on the arts of the Sikhs will be shown at San Francisco’s Asian Art Museum from 22 September 1999 – 9 January 2000.