The Quest Continues: Lost Heritage: The Sikh Legacy in Pakistan 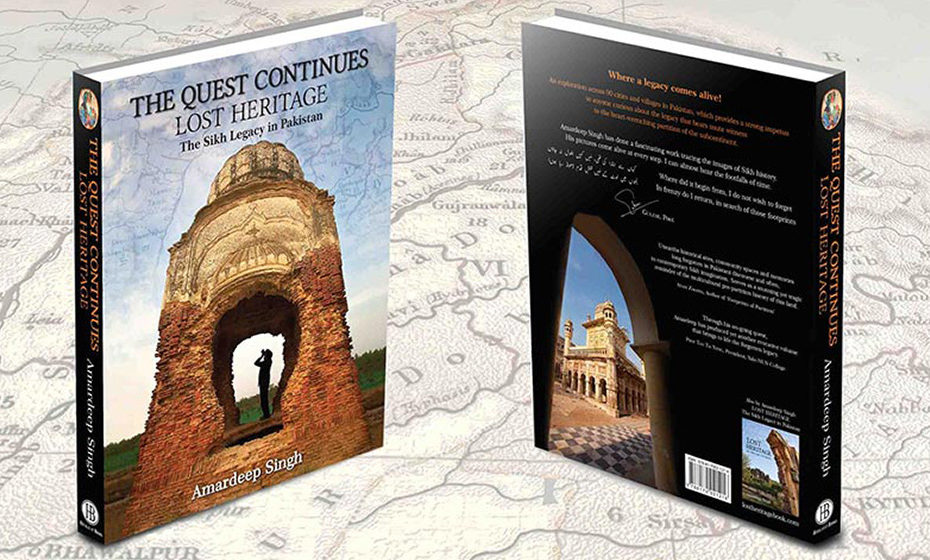 Partition wreaked havoc on thousands of Sikh families who left behind all traces of their past in the Khalsa heartlands of west Punjab to settle for a new life in India. An accidental author, Singapore-based Amardeep Singh took a break from corporate finance in 2014 to visit the bridge in Muzaffarabad where dozens of his family elders were rounded up and executed by frenzied mobs during Partition riots. The experience inspired Singh to set out on a personal quest to document his community’s footsteps in Pakistan, which culminated in the publication in 2016 of his first coffee-table book, Lost Heritage: The Sikh Legacy in Pakistan. Two years later, the pilgrim would return to Pakistan with his camera to continue his journey by exploring the remnants of a forgotten past scattered across 90 cities, towns and villages in the country. The result of this second yatra [pilgrimage] is The Quest Continues: Lost Heritage – The Sikh Legacy in Pakistan.

Most Pakistanis today are unaware that the British East India Company’s forces came closest to defeat in the subcontinent when they faced armies led by Sikhs eight years prior to the 1857 War of Independence. At the site of the Battle of Ramnagar on the banks of the river Chenab, the author reflects on the forgotten legacy of the Sikhs in the subcontinent, writing: “Indian history books overlook the major historical events of the Sikh empire, as these had occurred primarily on the soil of Pakistan. Similarly, in Pakistan the history books remain silent about the events of the Sikh empire because it was led by a non-Muslim.”

A section in the book dedicated to Pakistan’s growing Nanakpanthi populations raises interesting questions about modern Sikh identity in the country. The term ‘Nanakpanthi’ refers to groups who follow the teachings of Sikhism’s founder, Baba Guru Nanak, without ascribing to any of the outward appearances that distinguish Sikhs from followers of other faiths. The Nanakpanthis in Pakistan already outnumber the country’s turbaned Khalsa Sikhs, who are largely Pashto speakers from Khyber Pakhtunkhwa and the tribal areas. In the north-western city of Mingora, the author found the only gurdwara being run by Bansri Lal, a Nanakpanthi who lamented the mainstream Sikh community’s reluctance towards integrating Nanakpanthis into their fold.

The branding of Pakhtuns, Punjabi Muslims and Sikhs as ‘martial races’ was an important component of the Raj’s post-1857 colonial project in the subcontinent. Electoral constituencies in Pakistan and India realised soon after Partition that there were gains to be secured by letting the martial race theory linger on in the political imagination. Therefore, scholars who relied on reductionist racial stereotypes to decorate the conflict between Afghan chiefs and Ranjit Singh as a clash of civilisations found no shortage of eager audiences. Contrary to these perceptions, the author’s interaction with tribal communities in northwest Pakistan who came into conflict with the Sikh empire sheds light on a legacy of rivalry as well as shared mutual respect that was grounded in realpolitik and defies simplistic understandings of history.

Singh’s work is a valuable contribution to South Asian discourse on Partition that is introspective, human-centric and feels close to home. The Quest Continues is a delightful tale from the heart that heals as much as it informs. It is an essential read for Pakistanis looking for a personal connection with their country’s magnificent Sikh heritage.