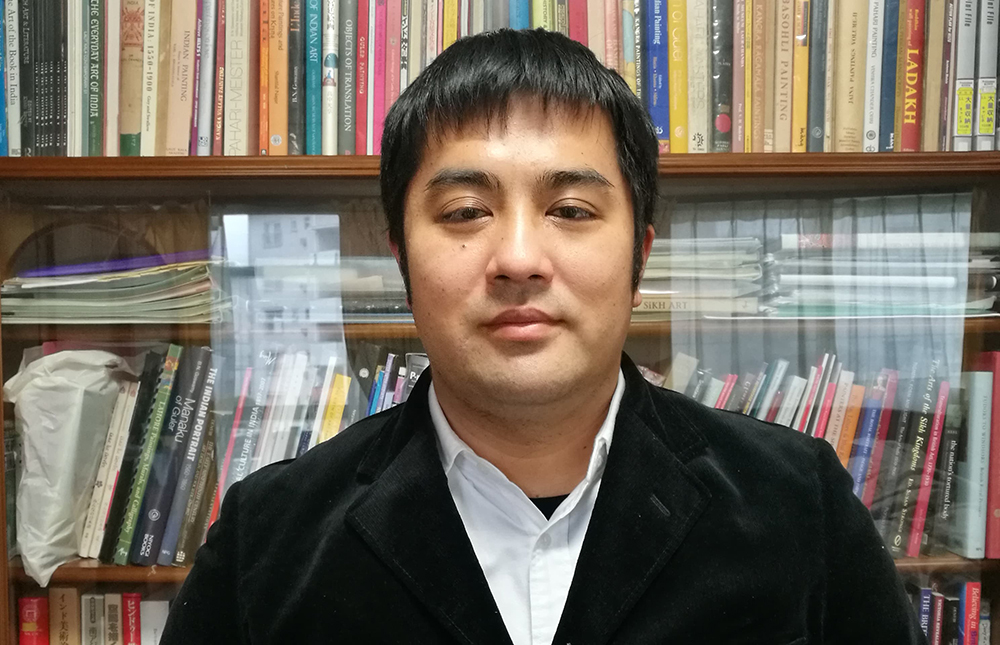 When one thinks of Japanese interest in Sikh art, the mind instantly goes to Buddhist art. After all, Japan has a strong Buddhist tradition since the 6th century CE when it was introduced by Buddhist monks. So it was a pleasant surprise to hear of doctoral student Atsushi Ikeda who has done his thesis on “Cultural Negotiation in Early Sikh Imagery: Portraiture of the Sikh Gurus to 1849,” with an emphasis on Guru Nanak’s representation in Sikh art.

Ikeda, an avid reader since childhood, grew up in the city of Kyushu, on the western edge of Japan. Living in this gateway to other Asian countries, Ikeda was filled with curiosity about Asian cultures. I spoke to him about his interest and scholarship.

VP: What led to your interest in Asian art history?

AI: I have aimed to be a researcher since I was a teenager. When I entered the undergraduate course at Kyoto University, I chose to study art history as I thought this discipline would fulfill my interest for Asian history as well as aesthetic aspiration for art works. In those days, Professor Keiji Sadakane, a specialist on the Ajanta wall paintings, lectured in Kyoto university. He is an authority of Indian art in Japan. I became very much interested in Indian art history, and hence chose India as my research field. Furthermore, I chose to study the Indian paintings in the early modern era because there are few scholars on the subject even across the world, although those paintings are, in my opinion, treasures in art history. After graduation, I proceeded to do my first masters degree in art history under Professor Keiji Sadakane at Kyoto City University of Arts.

VP: What make you interested in Sikh Art? How long have you had this interest?

AI: As I proceeded in my research on early Indian paintings, my interest gradually expanded to include the larger socio-politico-economic context in which these paintings were created and appreciated. At the same time, I started to question the conservative methodology in the Japanese Art History Association which did not allow any room for new ideas and perspectives. I changed my major to Area Studies which is more interdisciplinary and entered the Graduate School of Asian and African Area Studies at Kyoto University. I researched under Professor Tanabe, my former supervisor, whose major is historical anthropology. He has wide knowledge and experience in interdisciplinary research and is in charge of a national project on South Asian area studies in Japan. Under his support and supervision, I chose my present research topic of Sikh art and have attempted to combine methodologies of art history, anthropology, and area studies.

VP: In Japan, what are your sources of information for your article and research?

AI: Since Japan does not have ample resources for my research, I have wanted to pursue my doctoral studies abroad for a long time. In fact, Professor Tanabe also suggested that I do so when I first met him. There are not many Japanese scholars working on Indian art and most of them major in ancient Buddhist art. It means that there is almost no one who knows much about early modern paintings in India. I realized that I could not expect further training on my topic in Japan and developed a plan to study abroad so that I could receive specialist training in my field and topic, and also be in an environment where I had fellow researchers with whom I could discuss related topics.

VP: Where have you traveled for your research?

AI: In order to prepare myself for the study at the School of Asian and African Studies (SOAS), I devoted efforts to improve my English capability. I studied English intensively for two years in the Philippines, New Zealand, Singapore and the United Kingdom so that I could fulfil the requirements to be admitted to SOAS and also get a scholarship from the Japanese government. After two years, I felt confident that I would be able to proceed in my research with focus and concentration. After I successfully enrolled at SOAS, I conducted fieldwork in India and Pakistan in the second year, where I met some local counterparts including B.N Goswamy, F. S. Aijazuddin, Nadeem Omar Tarar (Director, Rawalpindi campus, National College of Arts, Pakistan) and Nadhra Khan (Associate Professor, Lahore University of Management and Technology). Prior to my fieldwork, SOAS provided me with Punjabi language training at King’s College, London for three terms. My stay in South Asia was nine months in total.

VP: What is it about Sikh art that you find unique or different?

AI: I think that Sikh art has been underestimated in both Western and South Asian academia. This is largely because early scholarship of Sikh art demonstrates that it was derived from Pahari painting, which is internationally recognized as one of the best artistic expressions in South Asian art. This means that Sikh art was regarded as no more than a deteriorated version of Pahari painting. However, a recent methodological turn of art history has changed the evaluation of Sikh art drastically. Art historians are shifting from a stylistic analysis to a more contextual discussion of works of art. From a socio-religious point of view, Sikh art is the third largest indigenous religious heritage behind Hindu and Islamic art. This stimulates my interest and motivation to explore the subject in my doctoral degree.

VP: Why did you pick Guru Nanak’s depiction in Sikh art as the subject of your thesis?

AI: I think that Guru Nanak’s depiction is an important clue to understand modern Sikhism. I know that there are many disputes about his portraits that are frequently hung on the walls of temple, house and other public/private places. The critics and theorists claim that the Sikh Gurus criticized those who worshiped an idol; thus Sikhism prohibits idolatry. However, the ordinary people still continue their practice of hanging portraits of Guru Nanak. These ambiguous attitudes of Sikhs towards representations of the Gurus are the reasons why I have been involved in the study of Sikh art.

VP: Who are your advisers and how are they able to advise you on this subject?

AI: For almost 5 years, I have been supervised by Crispin Branfoot, the Reader (Associate Professor) at SOAS and the foremost researcher in the field of art history of India. I believe he is the best teacher in the whole world for me to pursue my studies. It was my sincere wish to do Ph.D. research under his kind supervision. Another important figure is Gurharpal Singh, the Professor in Sikh and Punjab Studies at SOAS, who gave me a guidance to current trends of Sikh studies. Both of my thesis examiners, Susan Stronge and Yuthika Sharma, also deserve to be appreciated their contribution.

VP: Do you plan to continue your exploration of Sikh art after you complete your doctorate? What are your future plans?

AI: Yes, I do plan to continue the study of Sikh art. I aim to be a researcher who can provide a vision for the future on contemporary issues based on long term perspectives. Our society needs a vision for the future based on the understanding of diversity of cultures as well as the universal value for the humanity. I feel that the study of art history combined with area studies would be one way to provide for such knowledge. In the future, I would also like to seek an academic post in the field of art history in Japan where there are still few specialists on South Asian visual and material culture. With the kind of training I received at SOAS, I am very hopeful that I should be able to establish myself as an academic and cultural bridge between India and Japan.

VP: Do you plan any trips to India/Punjab in the future?

AI: I am planning to visit Chandigarh, the capital of the Punjab state, for the investigation of visual materials at the Government Museum and Art Gallery, Chandigarh. I also headed for Andretta (in Himachal Pradesh) where the Sobha Singh Art Gallery is located. Sobha Singh is a well-known portraitist of the Sikh Gurus. Since my PhD thesis did not discuss his life and works, I wish to explore his contribution to the Sikh separatist movement, the so-called Khalistan movement. This could be my next project and a major part of my second book which will be published roughly in a decade.