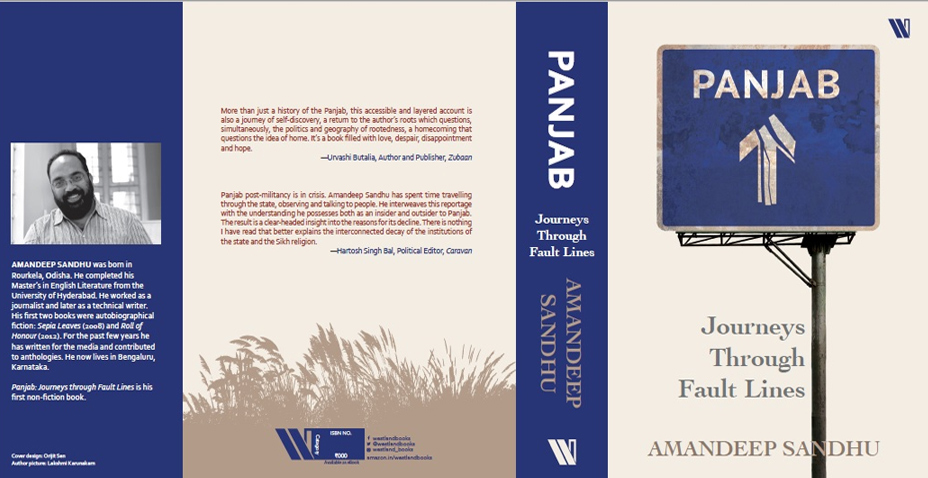 Destinations are about completion of journeys, finding answers and getting settled. The journeys, however, yearn for something more. They are about exploring further because they are about continuation. Bangalore-based journalist Amandeep Sandhu’s journey to his native land is one through which he tries to understand the enigma that is Punjab, the subject of the book. Born and brought up away from Punjab, but always tethered to its ethos and spirit through his family, Sandhu visited Punjab to explore the familiar only to find the uncomfortable gap between the reality and the representation. He spent three years collecting material for the book. It should be noted that the author prefers to use ‘Panjab’ with ‘a’ after ‘P’ instead of the popularly used ‘u’ in order to highlight the Persian origin of the term. To avoid any ambiguity, this review, however, uses the official and standard usage which has been used by almost all the books published on Punjab in the few decades.

Popular imagination links Punjab with farming and that is the thread chosen by Sandhu to begin his story of Punjab. Starting with the problems of farmers in rural Punjab the author gradually unravels the institutional mesh that explains what he observes. His data is drawn primarily from rural Punjab and involves juxtaposition of contemporary case studies with historical facts. The descriptive account of village visits by the author animates one’s understanding of contemporary rural Punjab. Thus, Sandhu’s account of Punjab is an autoethnographic one, focusing on a rural perspective. By extension, it is an emotional journey through which he explores his roots. The author chose to develop sixteen chapters based on sentiments and concepts that presumably echo the condition of Punjab. Consequently, he chose local terms as chapter titles which would likely make any Punjabi person connect with the book. The titles begin with Satt (wound), ‘berukhi’ (apathy) ‘rosh’ (anger), ‘rog’ (illness) ‘astha’ (faith), ‘mardangi’ (masculinity) and ‘dawa’ (medicine) followed by ‘paani’ (water), ‘zameen’ (land), ‘karza’ (loan), ‘jaat’ (caste), ‘patit’ (apostate), ‘bardr’ (border), ‘sikhya’ (education), ‘lashaan’ (corpses), and ‘janamdin’ (birthday). Thematically arranged chapters can also be read individually. Gradually, it becomes evident that the more he explores Punjab, the more he comes across the ‘faultlines’ that mar the social fabric of the state and society.

Sandhu narrates a story of Punjab with angst which may not be very amusing for many. The book brings into relief the fractured relationship between state and Sikh community in Punjab. It ponders over repeated institutional setbacks that Punjab has suffered over the years in addressing some of its most fundamental problems. The author infers that the agrarian issues of Punjab are at the core of Punjabi society and the solutions of the same cannot be provided by neo-liberal policies of the state. The very state which has been the wheat basket of the country stands today at the brink of impending environmental crisis, which threatens to leech its soil of its nutrients, land of its water and people of their agency. The identity politics of Sikhs became a pliable tool in the hands of leading political parties in independent Punjab, and they have been exploiting the sentiment to the maximum for their limited political gains, offering only ‘band-aid fixed’ solutions to its recalcitrant problems. Revisiting the tragedy of 1984 and its aftermath, which haunt Punjab’s collective psyche till date, the author feels that the failure of the state to address the issues that emerged during the phase of militancy has further deepened the crisis of Punjab. Ironically, the facts related to the unfortunate events during that phase still remain twisted and contested, which also find resonance in author’s accounts. The author poses some difficult questions to the state, to the Punjabi community and to himself in order to make sense of the tragedy.

Sandhu’s story of Punjab is replete with instances of wasted opportunities, betrayals and apathy on the part of state, resulting in the burgeoning trust deficit between the people and the state. Amidst this crisis, the advent of Aam Aadmi Party in Punjab politics aroused hopes among the Punjabi people, including the diaspora, hoping for a better life in terms of health, education and other infrastructural facilities. However, as a party rooted in Delhi, its inability to understand the complexity and ethos of Punjab proved to be its nemesis.

Reflecting on the ethos of Punjabi society, the author recognizes the feudal character of Punjab, but doesn’t explore its roots deeply. Though he devotes a separate chapter to caste, rightly bringing forth the struggles of dalits for agricultural land, his diagnosis of the problem demands more explanation. The section on education also highlights a few issues but is very limited in its scope. While recounting the rich cultural heritage of Punjabi language shared across the international border, it would have been interesting had he discussed communalization of language and culture in post-independence Punjab and removal of Urdu as a language from the school curriculum. The question of women in Punjab also remains marginal in the book, which the author also acknowledges. But, given the scale of issues discussed, it is challenging to fully assess all issues pertaining to Punjab in a single volume.

Yet, his attempt to understand Punjab in its entirety rather than in parts makes the book more meaningful, but also challenging. Most of the books published on Punjab in the last three decades focus primarily on Sikh identity politics. Sandhu’s book tries to go beyond this narrative and opens up the canvas of Punjab for a wider understanding, without sidelining the identity issue. Sandhu’s advantage is his focus on the contemporary situation of Punjab unlike many other books which focus more on its historical and cultural heritage. Sandhu’s peek into the history is only to understand the present, which remains his focus. Compared to some of the recent books on Punjab written by scholars such as Rajmohan Gandhi, Harnik Deol, Pippa Virdee and others, Sandhu’s work places more emphasis on his ethnographic experiences rather than his secondary readings. He uses journalistic language and avoids jargon. The format further gives latitude to the author to avoid repeated references to secondary sources of information, which makes the book read like a novel. The author aims his book to be read by an audience wider than in academia.

Overall, while Sandhu made his own journey to Punjab in order to discover what Punjab means to him, his subjective accounts invite others to make their own visit to Punjab and search for their own interpretations. The author’s observations and analysis may not be shared entirely by many but one cannot deny that the issues discussed do reflect the pain and aspirations of the Punjabi people. His honest attempt at a critical engagement with Punjab and some plain speaking make it an interesting read, and invites many others to enter the debate. Thus, the book rightly sensitizes the reader to the complexity of Punjabi society in contemporary times.