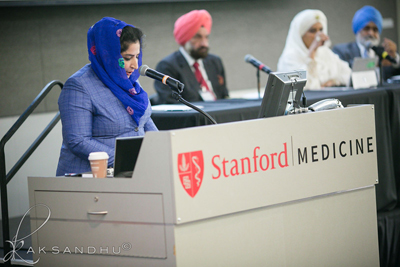 The 50th Anniversary of the Sikh Foundation included a two-day conference on May 6-7, 2017 at Stanford University, attended by more than 30 distinguished speakers and 200 guests.

On the first day of the conference, we heard about Sikh Studies past present and future. The afternoon session featured a riveting discussion on Sikh Arts and heritage by well-known authors, historians and professors, the senior curator of the Victoria and Albert Museum, the directors of Asian History and Culture Program at the Smithsonian Institute and the Sikh Foundation.
On Sunday, a variety of Sikh doctors practicing in the US spoke about the field of medicine. There was a fascinating panel discussion about public service as a role model for change by a former Parliament member and a former Planning Commission Chairman from India, a Senator from Afghanistan, and a Chairperson from the International Khalsa Council. Later five prominent Sikhs in the high technology world spoke about innovation and entrepreneurship as a driver for progress.
Please click the menu icon on the top left corner of each video to see all speakers in that section.