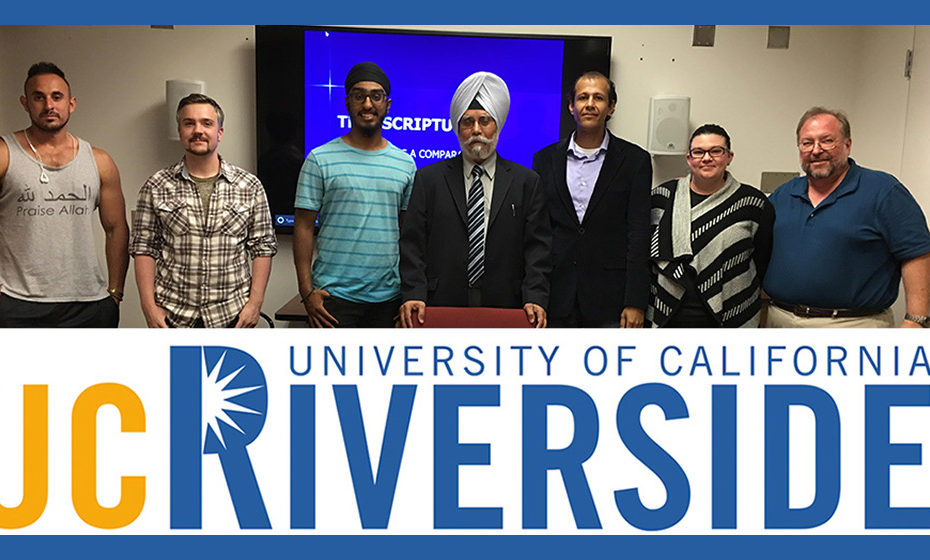 The Dr. Jasbir Singh Saini Endowed Chair in Sikh and Punjabi Studies is the result of a generous contribution given by the Saini Foundation, the Sikh Foundation and by a number of individuals and the University. It honors the memory of the late Dr. Jasbir Singh Saini, who was a cardiologist in Phoenix, Arizona. Dr. Pashaura Singh, appointed to the Chair, is a leading scholar and teacher whose work in the field of Adi Granth studies is internationally acclaimed. He currently also serves as the Religious Studies Department Chair and has sent the following report:

During this year the proceeds of this endowed chair have been used mainly to support various academic activities. I have made the following contributions in the area of teaching, research, scholarship and outreach activities during this year:

During the Fall 2017 quarter I taught a Graduate seminar on “From Text to Scripture” (RLST 241 001), highlighting the process of canon formation in various religious traditions, particularly the textual history of the Sikh scripture. I also taught the special independent course on “The Sacred Language of the Sikhs” to my doctoral student, Tejpaul Singh Bainiwal, in the Fall 2017 and Winter 2018 quarters. This was meant to prepare him for reading the original Sikh sources with competency. In Spring 2018 quarter I taught the Upper Division course on “Sikhism” (RLST 104 001) to a diverse body of 32 students. This was the most stimulating course for students of Sikh and Indian backgrounds who frequently interacted with non-Sikh students on the various issues debated in the class.

First, I delivered a lecture on “Guru Gobind Singh’s Egalitarian Message and its Relevance in Modern times” at a function to celebrate Guru Gobind Singh’s 350th Birth Anniversary at Loyola Marymount University, Los Angeles, on November 10, 2017. Second, I presented a paper on “Power Play in the Formation of the Sikh Canon” as part of the Spring Lecture Series organized by the Center for South Asia at the University of Wisconsin-Madison on April 12, 2018 at lunchtime. Third, I gave a talk on “Scripture as Guru in the Sikh Tradition” as part of a special Community Event in Celebration of Vaisakhi at Memorial Library of UW-Madison on April 12, 2018, following the exhibition of books on Sikhs and Sikhism in the evening. Finally, I inspired UW-Madison’s Sikh Student Association and faculty members, particularly Dr. Gurinder Singh Sohi, to work with the local Sikh community in Wisconsin to establish a Sikh Studies Program at the university. Professor B. Venkat Mani is already working on this project within the university system. He has been in touch with Dr. Narinder Singh Kapany, Chair of International Sikh Foundation, Palo Alto, CA. It should be emphasized that University of Wisconsin-Madison’s Center for South Asia enjoys great reputation in the academic world, and to establish Sikh Studies Program there will promote the field of Sikh Studies immensely in the Midwest.

My article, “The Guru Granth Sahib as a World Literary Dialogue” has been accepted for publication in the prestigious volume, A Companion to World Literature, edited by B. Venkat Mani and Ken Seigneurie, and to be published by Wiley-Blackwell, UK. The second major article with 12 entries on Sikhism and Violence, has been accepted for publication in the volume on Religious Violence Today: Faith and Conflict in the Modern World, edited by Michael Jerryson, and to be published by ABC-CLIO, Santa Barbara, CA. Third, my article “The millennial generation of the Sikhs in North America” has been published electronically in Sikh Formations: Religion, Culture, Theory (June 2018). Finally, I submitted the revised version of A Dictionary of Sikh Studies in the light of feedback from the review process to the Oxford University Press, UK. It will soon be published as part of the online Oxford Quick Reference (OQR). This dictionary will be an invaluable first port of call for students and teachers of Sikhism, Religious Studies, South Asian Studies, or Philosophy, as well as the related disciplines of History, Sociology, and Anthropology. It will also be an ideal source of reference for practicing Sikhs and for anyone with an interest in Sikh religion and culture.

Publishing of the Edited Volume on the Millennial Generation:

A special issue of Sikh Formations has published the volume on Living and Making Sikhi in the Diaspora: The Millennial Generation Comes of Age, edited by Pashaura Singh, Verne A. Dusenbery and Charles M. Townsend. It contains selected essays from the papers presented in the 4th Sikh Studies Conference held in May 2015 at UCR. It is published both electronically (June 2018) and in print form in the Sikh Formations: Religion, Culture, Theory, Volume 14, Numbers 3 and 4 (September-December 2018). The volume contains thirteen peer-reviewed essays from different scholars.

Routledge Handbook on ‘The Sikh World’:

In December 2017 I received an invitation from Rebecca Shillabeer, Commissioning Editor at Routledge Section of Religion (UK), to prepare a proposal on The Sikh World as part of the prestigious series of Routledge Worlds. After the acceptance of this proposal through a rigorous review process in March 2018, I co-signed (along with Dr. Arvind-pal Singh Mandair) an agreement with Taylor and Francis Group to edit the volume on The Sikh World to be delivered to the publishers by 30th June 2020. The volume will contain 50 essays on various topics related to the life world of the Sikh community. An international team of forty-five scholars will participate in this project. In line with the pattern established in the series of Routledge Worlds – http://www.routledge.com/books/series/WORLDS/ — The Sikh World will contain substantial thematic articles on a variety of topics on the living experience of the global Sikh community (Panth). It will consist of original pieces by the established scholars and writers in the field and will be international in scope. The volume will cover interdisciplinary themes such as intellectual history, sexuality, art, literature, music, cinema, medicine, science and technology, politics, global interactions and so on. It will aim at producing an interesting and intellectually stimulating volume that will integrate textual evidence with Sikh practice.

As part of 6th International Sikh Studies Conference, a three-day event on “Celebrating Guru Nanak: New Perspectives, Reassessments and Revivification” will be organized by the Dr. Jasbir Singh Saini Endowed Chair in Sikh and Punjabi Studies on May 3-5, 2019 at the University of California, Riverside. In preparation for the 550th anniversary of Guru Nanak’s birth, we have already invited papers that critically reassess and at the same time celebrate the ongoing significance and relevance of Guru Nanak’s social, spiritual, philosophical and political contribution to the world. In order to make this celebration a truly global event we anticipate the participation of both Sikh and non-Sikh scholars coming from India, Pakistan, North America and the UK, including Sikh activist organizations. We will invite local Gurdwaras in Southern California to participate in this mega event.

Like the previous years dozens of Sikh students of UC Riverside, UC Irvine and UC Los Angeles have taken foreign language proficiency test in Punjabi conducted by me. Notably, hundreds of students have availed this opportunity provided by the Saini Chair in Sikh and Punjabi Studies during the last thirteen years.

First, as a Co-Chair of the Steering Committee of Sikh Studies Group of the American Academy of Religion (AAR), I participated in the Boston meeting on November 17-20, 2017. Second, I chaired the AAR panel on “Sikh Scholar-Activists on Vulnerabilities” on November 18, 2017. The participants addressed the increasingly vulnerable positions religious minorities (particularly Sikhs), people of color, and migrants find themselves, and the nature of those vulnerabilities. Third, I delivered a public lecture on Vaisakhi celebration in Madison (Wisconsin) on April 12, 2018. Finally, I participated in the “Turban Day” in the last week of April 2018 organized by Sikh Student Association at the UCR campus to make non-Sikhs aware of its significance.

I am most grateful for this generous funding to my academic studies, which I have, and will continue to use to carry out significant research toward the specific objectives of this endowment. This funding has enabled me to pursue the areas as described and allowed me the opportunities to pursue other academic activities. As the first Chair-holder it is my cherished goal to see UCR, and especially the Religious Studies Department, becoming one of the leading centers of Sikh Studies in the world.