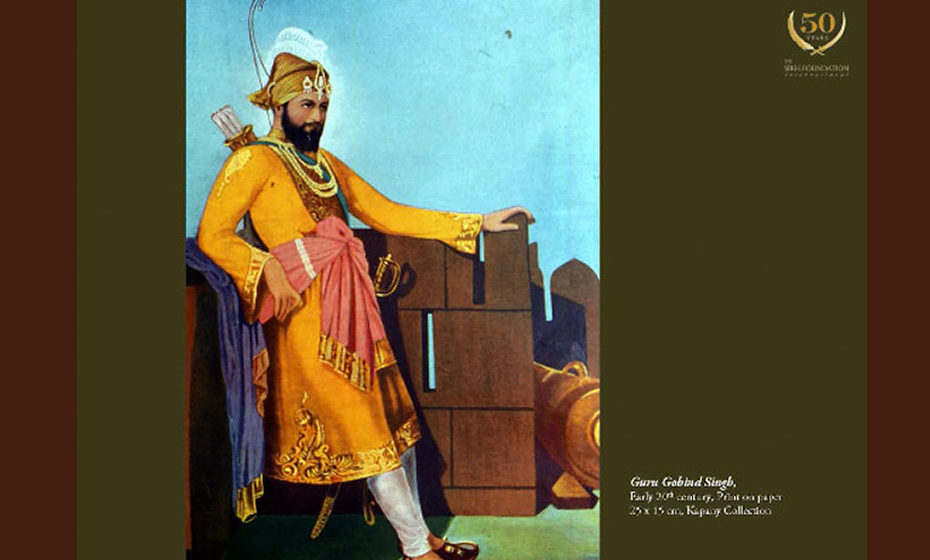 The Sikh Foundation wishes you on this joyous occasion on the 350th Birth Anniversary of Guru Gobind Singh. We present a video tribute to this great Guru, selecting artworks and drawings from the Kapany Collection. The video is put together by Sonia Dhami, Executive Director of the Sikh Foundation and AK Sandhu creative head of Curre Creative.

Celebrating Guru Gobind Singh’s 350th Birth Anniversary, the Sikh Foundation, presents a selection of artworks from the Kapany Collection, which inform us of the life and times of the Guru.

Guru Gobind Singh, a multi faceted personality, a warrior, leader, poet, linguist and musician is one of the most fascinating and remarkable figures in world history.

The flame that he lit in our hearts continues to inspire Sikhs all over the world to fight against injustice and aspire to excellence in our chosen fields.

When we look back at history, we see that within 100 years of the Gurus death, the Sikhs had an independent empire, which effectively stopped all foreign invasions, which had plagued the Indian heartland for centuries, giving way to peace and prosperity for its entire population.

The Punjab was the last kingdom to be annexed by the British and again within 100 years, India was freed from foreign rule enabled by the sacrifices of its freedom fighters, many of who were from the Punjab.

It is the legacy of Guru Gobind Singh that inspires a community, which is less than 2% of the population in its homeland, but its farmers today contribute over 40% to India’s national grain pool.

The Sikh community in Canada, which is also less than 2% of the total population, has contributed 4 ministers in the National Cabinet including the Hon. Harjit S Sajjan, the Minister of National Defense and the Hon. Navdeep Singh Bains, Minister of Science Technology and Innovation.

Brave young Sikh women all over the world are making waves. Lilly Singh from Canada and Gurmehar Kaur from India are named amongst the Top Ten Next Generation Leaders by TIME magazine.

This list of achievers is long and illustrious. It is the legacy of Guru Gobind Singh that the Sikh community all over the world continues to aspire to excellence, be it in sports, arts, business, technology, agriculture or public life.

Above all, as Sikhs we pray for Sarbat da Bhalla.

This meticulously detailed pen and ink drawing of the gurudwara which marks the birthplace of Guru Gobind Singh – the Takhat Sri Harmandir Sahib Patna Sahib.

Dressed as a royal prince, wearing a turban adorned with a white plume, endearing him to his people as “Kalgidhar Paatshah”, the Guru is casually leaning against the ramparts of a fort, with a partially visible cannon. He has a measured look on his delicately drawn face but sports a sword on his hip and a bow and arrows on his back.

In 1685, the young Guru and his family were moved from the village of Nanaki Chak further into the Himalayas. This drawing of the gurudwara marking the Gurus residence, on the banks of the quietly flowing river Jumna, vividly captures the serene beauty of the location. Here in Paonta Sahib, the Guru spent his time advancing his classical education and nurturing his poetic genius. He also honed his military and administrative skills, preparing himself well for his role as the spiritual and martial leader of the Sikhs.

After proving his prowess in battle, as a brilliant military strategist, the Guru moved back to Nanaki Chak. In this masterpiece, the Guru is astride his horse flanked by 3 attendants and set amidst a verdant green landscape of rolling hills. Dressed in fine clothes, adorned with jewelry, sporting a kalgi on his turban he holds the reins of his horse on which is perched his white hawk – conforming to his title of “Lord of the white hawks” “Chitian Bajan Valla”. The artist has drawn a halo around his head signifying his high spiritual position.

Guru Gobind Singh was also known by the epithet “rider of the blue steed” or “Nele Ghore da asvar” as in this early 19th century watercolor showing the Guru in a similarly stylized composition rendered with delicacy and elegance. This time at Anandpur was a momentous phase for Sikhs. Five forts were built here. By now the Guru was clear about his mission in life of which he writes in his composition “Chandi Charitra”.

In this contemporary painting, the scene is set for the Baisakhi celebration of 1699 at Anandpur Sahib. The Guru is baptizing the Five Beloved or “Panj Piyare” who came not only from Punjab but also Uttar Pradesh, Gujarat, Orissa and Karnataka, forming the nucleus of the Khalsa- the order of the Pure.

The call to battle came soon. The Gurus 2 elder sons- Sahibzadas Ajit Singh and Jujhar Singh were martyred in a battle with the Mughals at Chamkaur. The artist imagines the scene before battle. The Guru is presenting his older son with a sword while the entourage around them looks anxious even though the brave young Sahibzada is smiling in the face of certain death.

Artist Arpana Caur, has painted this delicate watercolor of the Guru with a pen in his hand sitting stoically composed with a faraway look in his eyes. With all seeming lost, but still full of faith and courage, he pens his famous poem in punjabi, “Mittar Payare nu, Haal Muridya da kehna”

Thereafter the Guru retired to the village of Talwandi Sabo and prepared the definitive edition of the Granth Sahib to be passed on as the Guru for all Sikhs. It was here where he finished the Zafarnama “epistle of victory” and sent it to the Mughal emperor Aurangzeb. His own writings were collected by Bhai Mani Singh and compiled as the Dasam Granth.

The Guru then proceeded to the Deccan to personally meet Emperor Aurangzeb. This fine miniature of the Guru astride a pinto horse fully armed with swords, bows and arrows and dressed in Mughal fashion is a copy from a set of 10 miniatures of the Sikh Gurus attributed to the workshop of Nainsukh of Guler in early 19th century. While some of the paintings in this set are in the Government Museum and Art Gallery in Chandigarh, the rest of the set is in the Lahore museum, a legacy of the partition of India in 1947 when art collections too were divided between the two nations.

On 7 Oct. 1708, Guru Gobind Singh life journey ended in Nanded. Maharastra. The Guru’s last directive to his Sikhs was to bestow the Guruship of the panth on the Sri Guru Granth Sahib, to be revered as the living embodiment of all the 10 Gurus.