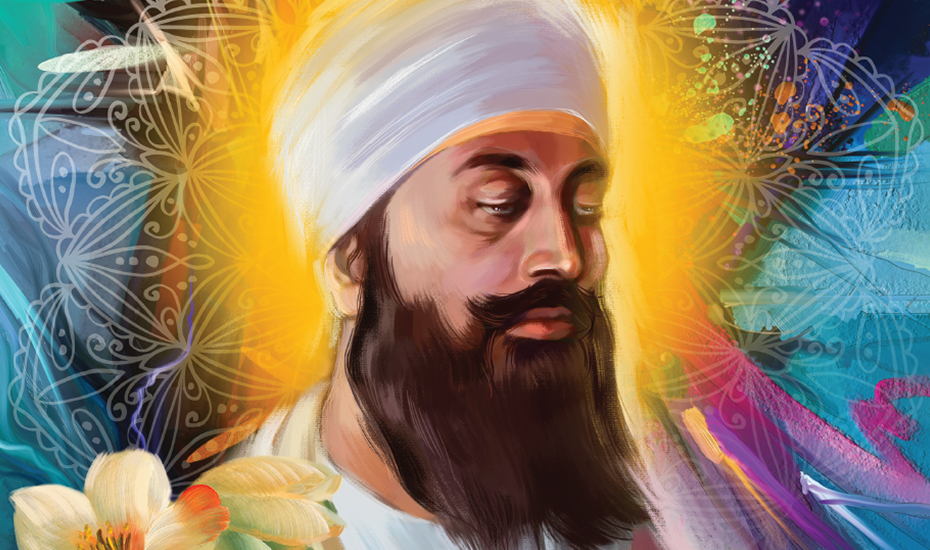 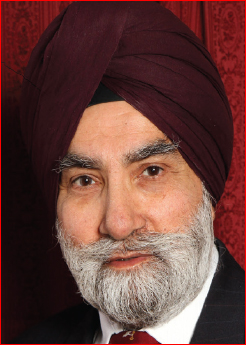 He held many high-profile positions including
departmental representation at European forums and
the World Trade Organisation (ex-GATT). He is well
respected in the Sikh diaspora and was honoured by the
Canadian Sikhs with “Sirdar Kapoor Singh” Khalsa Millennium
Award in 2001 in recognition of his scholarly interpretation
of Sikh ideology.

He writes extensively about Sikh ideology and identity. He has produced many publications including Sikh centennial souvenirs and an Australian publication about Vaisakhi, and numerous articles on topical issues affecting British Sikhs. He was awarded an OBE (Officer of the Order of the British Empire) in 2016 New Year Honours for his
community services.

We have recently celebrated the 400th birth anniversary of Guru Tegh Bahadur Ji. Due to COVID the expected programmes could not be organised the way we celebrated Guru Nanak Dev Ji 550th Birth Anniversary.  We are happy that with the help of the modern techniques seminars and Kirtan Darbars could be organised.

The Sikh Missionary Society U.K. has always been active to produce literature and organise seminars. It is to their credit that the first edition of the popular book “Guru Tegh Bahadur The True Story” was released in 2017. This year, Sikh Youth Australia have released a revised second edition.

The author of the book is S. Gurmukh Singh who has the unique honour of being the first identity Sikh senior Civil Servant to represent U.K. government department abroad. He was honoured with OBE award for his meritorious services towards society. I have the pleasure of meeting him and have been continuously reading his articles. I have always found in him intellect, Panthic devotion and writing skill.

I am thankful to him for digging out old records in order to write a true story of the life of Guru Tegh Bahadur Ji and to remove the superfluous tales. The missionaries have been narrating the great powers of our Gurus adding stories full of miracles. From my childhood we have been reading  about Guru Nanak’s travels where unnatural happenings were being highlighted only to prove the greatness of our Guru. Much later the Sikh historians produced authentic versions through the books.

While reading the text of the new book I have found that S. Gurmukh Singh has cleared many myths and has written his version based on historical facts.  The Sikh community always respect Makhan Shah Lubana  and have been giving credit to him to find the ninth Guru. But S. Gurmukh Singh has proved that from Guru Nanak to 10th Guru there have never been any gap period for succession of the next Guru. Every Gurus in his own life time selected His successor and bestowed Gur gaddhi to him. Guru Harkrishan  the only child God in the world history named his own successor-Baba Bakala. The learned author has mentioned in detail that Guru Tegh Bahadur was always called Baba. He has proved that Guru Harkrishan very clearly named him as Ninth Guru. Guru Tegh Bahadur accepted his role and was traditionally honoured by the Sikhs. Similarly, Guru Tegh Bahadur named his son Gobind Rai as tenth Guru before he left  Anandpur in 1675 A.D.  Makhan Shah Lubhana reached Bakala much later and served the Guru with full devotion  for many years.

The book further educates us that Guru Tegh Bahadur was arrested three times by the Mughal forces.  His last arrest was near Ropar when he left Anandpur Sahib for Delhi after listening to the harrowing tales from Kashmiri Pandits. A detail account of Gurus detention in Sarhind and other places has been mentioned and also how he was tortured and was kept in an iron cage.

Gurmukh Singh Ji has emphasized that how Guru Tegh Bahadur sacrificed his life for the freedom of religion. Guru Ji never agreed to conversion under allurement or threat. Guru Ji wanted that everyone can choose his way of worship and there should be freedom of conscience. The book proves that Mughal Emperor Aurangzeb was in Delhi and issued order of execution of Guru Tegh Bahadur. Aurangzeb could not tolerate anyone who was a defender of religious freedom.

Here I may add that during my speeches in Indian Parliament I narrated the atrocities committed by Mughal Emperors Babar Jahangir and Aurangzeb. Guru Nanak in his Bani has mentioned that Babbar was responsible for creating terror and bloodshed and killing the innocent people. Emperor Jahangir issued order for the martyrdom of Guru Arjun Dev Ji. Aurangzeb put his father in prison, killed his brother and ousted his sister and wanted entire India to be converted to Islam.

This book has also cleared another doubt regarding the role of Baba  Ram Rai son of Guru Har Rai who was earlier ousted for wrong quoting of Gurbani. It is now written that Guru Tegh Bahadur met Baba Ram Rai in Delhi on 21st March 1664. Secondly the book has come out with another positive historical fact that when Guru Harkrishan Ji met emperor Aurangzeb Baba Ram Rai ji accompanied him. A detailed dialogue by Baba Ram Rai Ji  is quoted on the basis of new findings from Bhat Vahi Poorbi – Dakhni.

Earlier I read that Guru Gobind Singh met wife of Baba Ram Rai Ji at Paonta Sahib. I remember Gyani Zail Singh, Chief Minister of Punjab went to Dera Baba Ram Rai in 1974 and was highly impressed that holy artifacts were properly maintained. He had that time advocated that there should be reconciliation of the Sikhs and the Dera. I as Chairman National Minority Commission was able to get huge financial grant from Culture Ministry Government of India for  conservation of the paintings, artifacts and the building of the historic dera.

The book has condemned the role of Mullahs and Brahmins in eastern India who were unhappy with the preaching of Guru Tegh Bahadur. This was very natural because Guru Nanak and all other Sikh Gurus were against the rituals being performed by the pujaris at all religious places. This resulted in the loss of the income and popularity of all of them. Guru Nanak visit of Haridwar is a big testimony to this as he started throwing water to the opposite direction which annoyed the Hindu pujaris. We must realize that Aurangzeb was a dictator and from day one he decided to spread Islam through oppression. Even Jahangir in his autobiography-Tuzke Jahangiri has mentioned that he ordered execution of Guru Arjun. We have been putting the entire blame on Chandu. The Muslim historians have always highlighted the Mughal emperors as benefactors of people and this distorted the history. They have never criticized the anti Hindu role of the Muslim Kingdom.

I hope the book will be properly received by all of us and everyone should present it as a gift to their friends. The Sikhs at large should adopt book reading habit so that we may encourage authors to enrich the Sikh literature.

I was fascinated to read this book online  published by the Sikh Missionary Society of UK. The  inner cover page declares unequivocally the theme of the book: “The account which follows is that of Guru Tegh Bahadur, Nanak IX. His martyrdom was a momentous and unique event. Never in the annals of human history had the leader of one religion given his life for the religious freedom of others”.

The message of General Secretary of Missionary Society, Teja Singh Mangat, reveals that there is a sister volume of this book “Defender of Religious Freedom: Guru Tegh Bahadur” meant for students. He goes on to elaborate the purpose of this book: “Earlier publications have been influenced either by Brahmanical thought or are biased against Guru ji’s life mission and the noble cause which he pursued to the end. At least one text book published by the National Council of Educational Research and Training (NCERT) of India, relies on highly biased and even hostile non-Sikh evidence like the Mughal reports and Persian sources”.

In the Introduction to this volume, the author reveals the purpose of writing this book: “The main reason for this publication is that earlier publications about the life and martyrdom of Guru Tegh Bahadur either do scant justice to the Guru’s active life or have been written more like fiction in the traditional saakhi (story-telling) style. One example is an otherwise informative biography of Guru Tegh Bahadur by Dr Trilochan Singh which is written more like a historical novel”.

The book opens with a Chart of Sikh Gurus’ succession followed by a Synopsis of the book, as in a Ph.D. thesis, and historical background of the Sikh movement. The book has been divided into four Sections: Life before Guruship; Guruship; Martyrdom; and After Martyrdom. The author has avoided superfluous details and summed up the whole thesis in just 56 pages of text. He has tried to remove the cobwebs created by other authors by his research oriented approach of sifting the facts from fiction.

Guru Tegh Bahadur was trained as a warrior by his father and he participated in most of the battles fought by Guru Hargobind. The author sums up his mission and life in Baba Bakala as follows: “Tegh Bahadur was now remote from the main seat of Sikhism, yet he carried with him the ambience in which he had grown. He was the example of virtues the Gurus had taught. He had humility and compassion and a firmness of mind. He lived a strict and holy life and spent most his time in meditation. Yet he was no recluse. He attended to family responsibilities. He went out riding and followed the chase. In the Sikh faith the temporal and the spiritual were not disjointed. This was amply attested in Guru Tegh Bahadur’s life.”