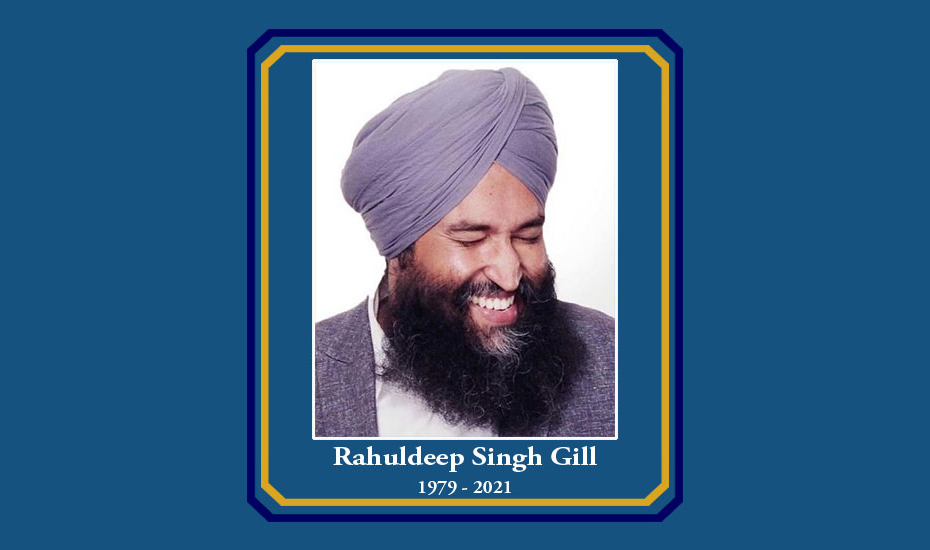 The death of Rahuldeep Singh Gill on New Year’s Eve is a tragic end to a promising career, and the field of Sikh studies suffers from his passing. His 2016 Oxford University Press book, Drinking from Love’s Cup: Surrender and Sacrifice in the Vars of Bhai Gurdas Bhalla was justly commended for its accuracy of translation and rich interpretation of an important area of Sikh textual history. It was based on his dissertation work as a PhD student at the University of California, Santa Barbara, where he is remembered as a jovial but dedicated young scholar. He quickly rose to the ranks of the most promising new cohort in the field of Sikh Studies. As a professor of religious studies at California Lutheran University he was greatly admired by colleagues and students, and contributed much to the life of the university and to the broader community where he was active in interfaith relations. With support from the Sikh Foundation, he commuted for a time from Southern California to Berkeley to teach a course and lay the groundwork for a possible Sikh studies program. He seemed poised to develop a significant career that alas was cut short. All in the field of Sikh studies morn his loss. – Mark Juergensmeyer

My first encounter with Rahuldeep Singh Gill was in 2013 at the Shri Guru Granth Sahib Conference, at the San Jose Sikh Gurdwara. I remember Rahuldeep’s presentation on the concept of kaliyug in the Guru Granth Sahib. He described poignantly that Guru Nanak was born and raised at a time of social conflict, cruelty, and loss and from a very young age was preoccupied with the roots of such conflict and cruelty in order to disrupt the status quo. Rahuldeep then went on to describe the ways in which Sikhs continue to live in kaliyug like conditions in post 9/11 US. Using the imagery of kaliyug he advocated for Sikhs to follow Guru Nanak’s example of championing socal justice, love, and compassion. Rahuldeep skillfully and passionately described how Gurbani interweaves philosophy with compassionate action.

After the conference Rahuldeep and I exchanged some ideas about our work and eventually met in other Sikh studies settings. While we did not know each other well, it was hard not to feel his deeply held convictions and his commitment to being an effective communicator and teacher. The Sikh studies community is not very large and I know that the loss of Rahuldeep will be felt around the world. His untimely passing has reminded me of the importance of mutual support, kindness, and caring among scholars and community leaders alike. For his surviving family, I hope they will find some solace in knowing that he and his work had an impact and he will be remembered by all those who knew him.

I met Rahuldeep Veerji in 2013 through community advocacy work we were both collaborating on in regards to ensuring that Sikh history was accurately depicted and represented in California’s curriculum. Within five minutes of having met veera, he had declared I was his sister and that was just that! He definitely lived up to that role.

Deep veera was one of the kindest human beings I have ever known; fiercely loving, and protective of all those he cared about. His smile, laughter, and passion for revolution was contagious. He was a brilliant writer, scholar, and professor who worked tirelessly on behalf of our community. Veera was a big hearted teddy bear for all of us who loved him and a force to be reckoned with in his revolutionary activism.

He was the best big brother this sister could ask for. He was always there for me whenever I needed him and never wavered in his love or support. Over the years we would talk for hours…laughing, crying, and raising our fists about everything life threw at us.Throughout all of life’s ups and downs, Veer always drew from his immensely deep knowledge of Sikhi to inspire and uplift me and everyone around him.

My love and prayers go out to his beautiful family, especially his amazing children. Veerji always lit up when speaking of them and I pray Waheguruji carries them through this tremendously difficult time.

I remember walking into Cal Lutheran University Chapel, alone. I had traveled to Southern California for an academic religion conference to further explore spirituality and faith. I walked in and took a seat in the third row from the front. And Rahuldeep slid in from the left with a big warm smile. He wanted to make sure I settled in. We’d meet later that week for a discussion in his Religion 101 classroom. This community brother showed up consistently throughout the conference to make sure I was doing okay, introduced me to his colleagues, and had me seated at a dining table with scholars who studied feminism and faith. He also reminisced about my partner, Banjot, with the biggest smile and eyes that beamed, “I love that guy.” During our discussion in Rahuldeep’s classroom, we openly discussed feeling our faith connection, thinking through it, and the idea that both reason and passion are the way forward. How when we feel our connection, we, in turn, feel and connect with the Creation around us. Every person. Every plant. Every animal And in feeling this Earthly Creation, we can imagine a world where we rank humanity amongst our first societal priorities.

Rahuldeep’s moments of Chardi Kala were in full bloom and he did not shy away from that fullness of being and sharing that space with others. Will miss you, Veer Ji.

I am heartbroken to lose a dear friend. Life gets longer and some journeys end before my eyes. I feel it was the time to watch him soar higher and yet we face the truth of losing him forever. Rahuldeep Singh Gill was a force of knowledge, of power and of incomparable compassion. He fought for truth and justice for all of us. He said the things and asked the questions many of us could never be courageous enough to tackle. He was a champion for all his friends but especially friends who are women. He strongly encouraged them to reign this earth with their love, power and talent. He leaves a gaping hole in my heart and an unimaginable absence that is hard to get used to.

To his lovely family, I hope you can feel the love we all couldn’t send to him all this time. I hope you can gather the strength he distributed among us all. All of us, friends of Rahuldeep, hold pieces of him together in our memories of him and with him for you to have always. A remarkable quality and memory of him is his big and open hearted way of applauding success and achievements of his friends. I was lucky and thankful to be encouraged by him in this way many times.

You’re missed my dear brother. You were significant and remarkable to this world.

in the Vārs of Bhai Gurdas Bhalla

A collection of Rahuldeep’s writings & lectures
Contributions to the “Rahuldeep Singh Gill Memorial Fund” can be made at https://gofund.me/e03a5a83.
All donations will be directed to benefit Rahuldeep’s wife and children exclusively.