NARINDER SINGH KAPANY AND SIKH FOUNDATION – Remembering on his Birthday 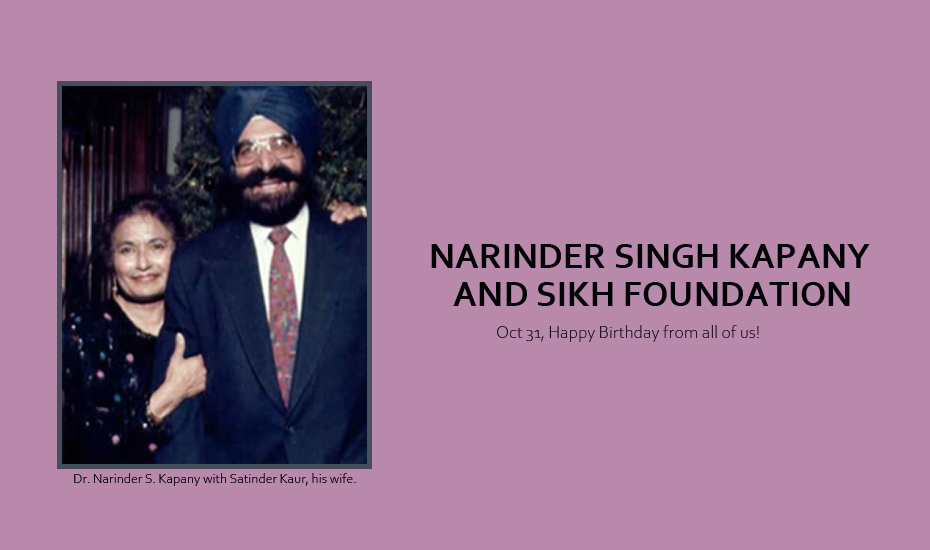 America-based Dr. S. Narinder Singh Kapany was one of the most popular and respected Sikhs who did his utmost in the promotion and preservation of Sikh Art and Heritage. I think no one else has done such a unique service in this field. It was because of him and his wife, Satinder Kaur, that in 1999, the 300th year of the birth of Khalsa, the first exhibition on the Sikhs was held at the Victoria and Albert Museum in London. They also organized exhibitions of Arts of the Sikh Kingdom in San Francisco and Toronto.

Born on October 31st, 1926 in Punjab, Dr. Kapany resided in San Francisco for many decades. He and his wife, set up the Sikh Foundation in 1967, as a non-political organization to preserve and promote the Sikh heritage in the West. Maharaja Yadvinder Singh of Patiala was one of its first patrons.

In 1997, the Kapanys endowed a chair of Sikh studies at the University of California, Santa Barbara. In 1999, they gifted 5 lac dollars to the Asian Arts Museum in San Francisco to establish a Sikh Gallery and donated artifacts from their collection. They organized an exhibition ‘Splendors of the Punjab: Sikh Art and Literature in 1992 in Berkeley University to celebrate the 25th anniversary of the Sikh Foundation.

The Sikh Foundation has an online publication of the ‘Sikh Research Journal’ and an online store that provides a comprehensive collection of books of Art and other subjects related to Sikhs and Sikhism. The Foundation funded the renovation of Guru Ki Maseet in Hargobindpur Punjab through UNESCO which was handed over to the Muslim Community. This was hailed all over by the people. The Foundation publishes a 12-page colored annual Sikh Art Calendar which is in great demand all over the world. I may add here that the First Sikh Art Calendar was published by me in 1971 when I was posted in Markfed. Foundation has published a dozen books on subjects ranging from religion, history, art, and culture of Sikhs including children’s books. It has also published two journals, greeting cards, and Fine Art posters. The well-known popular books published by the Foundation are:- The Sikhs and their Religion (1968), Guru Gobind Singh: reflections and offerings (1969), Warrior Saints (1999), Arts of the Sikh kingdoms (1999), The name of my Beloved (2001), I see no stranger (2006).

Dr. Kapany and Satinder, were collectors of Sikh art and artifacts. Satinder herself was an avid writer and artist and was instrumental in shaping the Kapany art collection. They built their collection by acquiring  coins, miniature paintings, jewelry, and other artifacts  relating to the Guru period and Maharaja Ranjit Singh.  When a  group of Sikhs opened a Sikh gallery in Massachusetts Museum in Washington D.C., Dr. and Mrs. Kapany were kind enough to contribute rare Sikh Art to them. I was there along with him at the inauguration ceremony.

The Kapanys encouraged many artists to make documentaries on Sikhism and encouraged many Authors to write books on Sikh Philosophy. Dr. Kapany was given an honorary doctorate by Guru Nanak Dev University in 2001. He was also given the prestigious Parvasi Bhartiya Award by Shri Atal Bihari Vajpayee the Prime Minister of India in 2002.

Dr. Narinder Singh Kapany is recognized as the “Father of Fiber Optics”. On a global scale, his research in the 1950s led to the invention development of Fiber optics and he was the first person to demonstrate the transmission of an image through a bundle of glass fibers. The word Fiber Optics was coined by him. Furthermore, these Fibers are responsible for the transmission of higher bandwidths of information over great distances, in which their applications over the past few decades have revolutionized countless industries, including medicine, communications, entertainment, networking, and business. Without Dr. Kapany’s  groundbreaking gifts to science, none of this technology would have been invented and the very nature of our world would have been dramatically different today.

This scientific genius hailing from Punjab was recognized as one of the seven ‘Unsung Heroes’ by Fortune magazine in their ‘Businessman of the Century’ issue in 1999. It is to the credit of Dr. Kapany that more than 90 patents are named after him which are being used in the Sputniks and other scientific industries. He received many International awards. He was a fellow of numerous scientific societies including the British Royal Academy of Engineering, the optical society of America, and the American Association for the Advancement of Science.

We are all grateful to Prime Minister Narinder Modi for recognizing the services of Kapany and conferring the Padma Vibhushan, the highest Civilian Award by Govt. of India to him. His daughter, Kiki Kapany, who is carrying on his legacy, received the award in a glittering ceremony at the Rashtrapati Bhawan from the President of India.

We are proud that a Sikh attained such a high position and respect in the scientific world and devoted significant time to promoting Sikhi. I’m privileged to have met his illustrious father in 1973 in Dehradun, who was  associated with Bhai Vir Singh Ji and his brother Dr. Balbir Singh. His uncle S. Mangal Singh I.A.S. was an administrator and a renowned P.R. man who worked with Maharaja Yadvinder Singh of Patiala.

I am happy the Kapany family is keeping the torch burning brighter.