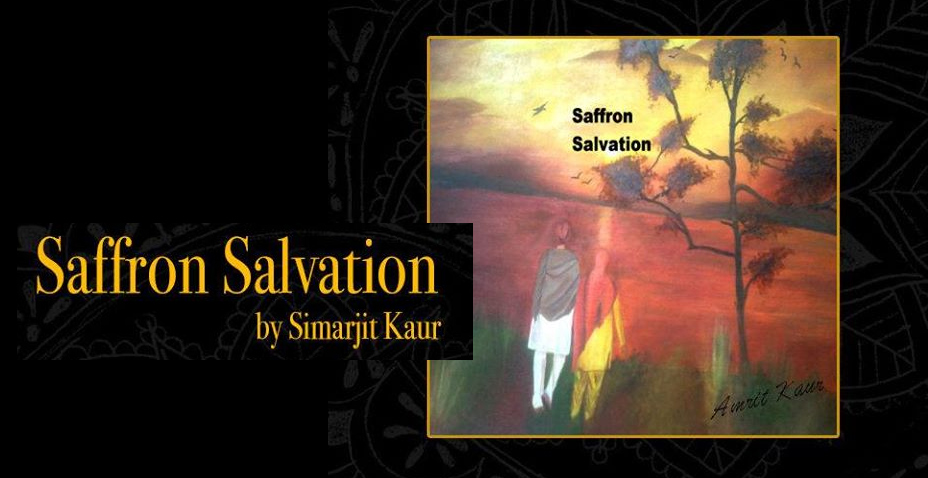 Saffron Salvation, is a literary novel set in 1984 - photo courtesy of Simarjit Kaur

Saffron Salvation, is a literary novel set in 1984. It is the first novel set in the Sikh genocide from a Sikh perspective written for a Western audience. Three editions later, enjoyed by thousands, it is now available as an e- book on Amazon.

Saffron Salvation was the subject of a seminar at the International Genocide Scholars conference, University of Manitoba, 2014 highlighting the power of art to understand genocide.

Sharn meets Jassa, a protestor in the Punjab civil disobedience movement, who believes in fair human rights and decentralisation across India to create the United States of India and Holy city Status for Amritsar the Sikh’s holiest and sovereign city. But in 1984 Sharn’s people are caught in a vortex of disaster that change Jassa and Sharn’s lives forever.

Simarjit Kaur, the novel’s author, wanted a renaissance in the genre of Sikh novels to emerge. Inspired by the spiritual warrior traditions of Sikhism she started writing because there weren’t books where the heroes were spiritual, romantic, brave people as she knew from her life. Her parents, Joginder Singh and Harbhajan Kaur, were bold Sikh activists in Britain in the 1960’s fighting for the rights of sikhs to wear the turban to work, fighting discrimination. Through them she was immersed in a world of panthic activism, spiritual flair, philosophical verve and a biblical vision for the sikh nation (culminating in her father writing “Rehmat Di Jhalak,”) with her mum typing up notes to panthic meetings as crowds gathered at their house.

In 1999 despite a reluctance to talk about ‘the past’ some brave academics and scholars gave reviews of the novel.

“By writing Saffron Salvation the author has shown a keen sense of purpose and a remarkable grip over the sikh ethos.” – Dr. Darshan Singh, Professor and Chairman, Guru Nanak Sikh Studies, Punjab University. Dr. Arjan Kirpal Singh, International Professor of Sikhism said: “At last there is a focus purely on the Sikh psyche and the question of what makes a Sikh tick…”

Simarjit accidentally put pen to paper and put the novel away unfinished many times.

“My father was a deep philosopher who read Tolstoy, Socrates, Dostoevsky, World theologies, and had a deep knowledge and faith in the Guru Granth Sahib Ji.….I read a small pamphlet by Punjab Human Rights Organisation, PHRO, smuggled out of India, and it moved me to tears of how a sikh student’s life changed forever in 1984,”

Professor Harpal Singh, Sikh National College wrote of the novel “…..Extremely honest, passionate and faithful to what we have witnessed over the years…’ –

“In 1984 the world of the Sikhs shattered. We had rich dhadis, preachers, poets….who spoke unflinchingly even when facing death. Brave writers like Ram Singh Billing who died trying to reveal the truth. A novel becomes a key to unlocking different dimensions of the depths of a people. In genocide the state powers who caused destruction want these stories buried. My father Joginder Singh bravely published the novel in 1999 and soon I was coming across people who witnessed the genocide, even prisoners of conscience who read Saffron Salvation in jail before I even met them! People asked me had I read Victor Hugo, Dostoevsky? I was ashamed that there were dissidents in India who were persecuted and yet had read Victor Hugo and me in my ‘free’ world had read so little. Our stories stand upon the shoulders of giants. The voices of sikhs coming into literature is a power to help the world understand us and for us to understand ourselves further.” 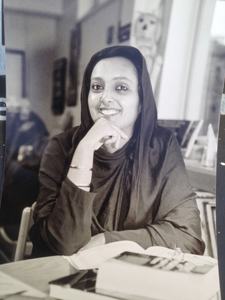 Simarjit has been a humanitarian activist for the past fourteen years helping widows and torture survivors of 1984-1994 through TARAN, using over a decade of her salary, savings and book revenue. She researched with the CCDP, Committee For Disappearances Punjab, finding survivors who remained un helped and unknown beyond established findings. She set up ‘the first medical network for all survivors in this region of impunity…’ (Justice Ajit Singh Bains, PHRO) in 2002 inspired by Dr. Vincent Iaccopino, Physicians for Human Rights USA and brave field researchers like Harshinder Singh, Amrik Singh, N. Singh, CCDP. She was nominated for the World Sikh Awards, 2013, for her work in charity despite being field based in Punjab for years and relatively unknown in the West.

Simarjit has spoken several times in British parliamentary seminars, at UN Women, Vrindavan, 2014, directly asking people in authority in India and Geneva- What have they done for the plight of torture survivors and why has a humanitarian route not been enabled in post conflict Punjab? There are still thousands of severely neglected cases of survivors.

“The struggles in 1984- sectarianism, spirituality in the face of oppression are terrifying and deep. You could be the artist who gives insight to what simply is incomprehensible. It is a third generation survivor of the Biafra genocide in Nigeria, who had the talent to tell the story through ‘Half of a Yellow Sun.’ We have the potential even generations later to never let the world forget the sikh genocide. You could be that novelist. There is still such a vacuum in literature about sikhs.

The old heroes of Bhai Vir Singh, the voice of Puran Singh, have their own new journeys to tell in the twenty first century. The novel’s cover is by Amrit Kaur whose family faced sedition charges and raids in 2009 including sedition charges for holding books on the Sikh genocide in India! The story of our survival as Sikhs continues.”

“I have written several novels since which are also based on true stories: Lakhi and Amarpal- The Boy who left his Heart in Punjab; Deepa’s Wedding; The Students. I am editing TARAN’s human rights report.

The bravery of the Sikh people against tyranny was immense. Our people suffered such dehumanisation and destruction.

Art has the power to transcend and give meaning to suffering as we witnessed the countless lives of students, activists, intellectuals and farmers lost in the Sikh genocide. To even hold a mirror to what we might be…”