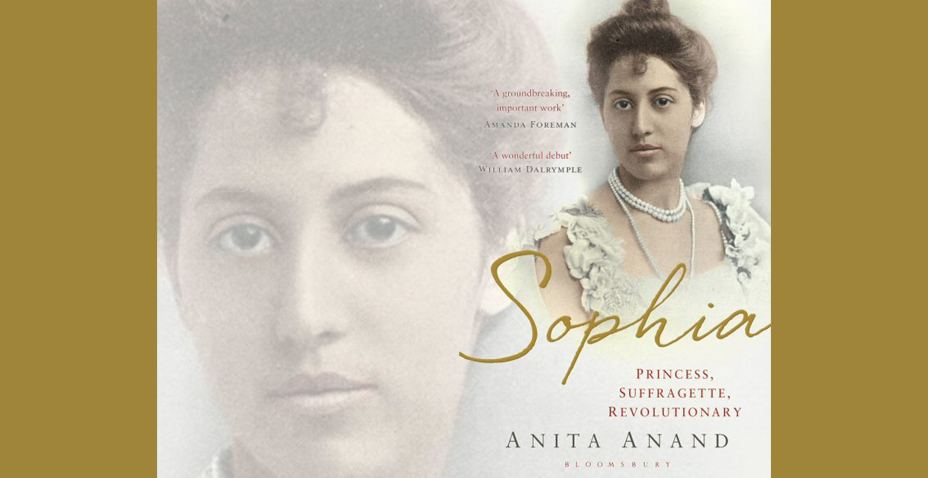 Review by Jeanne E. Fredriksen Exhumed from obscurity, Princess Sophia Duleep Singh (1876-1948) is celebrated in Anita Anand’s ambitious but often-didactic biography, Sophia–Princess, Suffragette, Revolutionary. The youngest daughter of Maharajah Duleep Singh—robbed of his kingdom when he was a child and brought to England at age 15—and the granddaughter of the “Lion of Punjab,” Maharajah Ranjit Singh, Sophia was born and raised in exiled English comfort and royal lavishness. Because of her exotic heritage and because her godmother was Queen Victoria, Sophia was internationally known as one of the “Duleep Singh Princesses.” Her life as a socialite was fulfilling but only insofar as party-going, wearing the latest Paris fashions, and raising champion show dogs; she was never considered marriageable because of the color of her skin. Nevertheless, she was her own woman, boldly devoted to the new rage of cycling, photography, and, to her family’s dismay, smoking. For all the pleasure Sophia experienced in English society, though, it is clear she lived with equal parts of loneliness and depression that receded when a sibling required her help or companionship. One British newspaper called her a “thoroughly English girl,” yet she was always searching for purpose in life to seal the society-imposed gaps. Allowed to visit India for the first time in 1903, she saw “poverty and depravation on a scale that overwhelmed her. Also, she came face to face with all that her family had lost.” The realism that kills the debutante gives birth to the revolutionary, and Sophia would never be a carefree socialite again. Back in England, Sophia focuses her energy on promoting awareness of and fundraising in aid of the lascars—Indian sailors who were stranded on the English coast and abused by their employer, the East India Company. Three years later, Sophia returns to India at which time her political views begin to find definition. As political turbulence grows in India, the princess befriends activists Sarla Devi Choudrani, Lala Lajpat Rai, and Gopal Krishna Gokhale. Sophia goes back to England in 1907 with a renewed passion to agitate and act. Sophia steps wholeheartedly into the women’s suffragette movement, most notably by spearheading firm personal protests against paying taxes because she had no representation. She sits with suffragette leaders at rallies, sells the movement’s newspaper on the street, chants slogans at meetings, and lends her presence to help women gain their voting rights. Unlike her compatriots who suffer indignities at the hands of the police, Sophia is never arrested despite the Political and Secret Department of the India Office having kept a dossier on her activities since before she was ten years old. Even as she grew older, she continued to lead. During World War I, she undertook the role of nurse to wounded Indian soldiers who fought on the Western front. During World War II, she moved to the English countryside for safety and sheltered a family of children, something she reveled in as she had no children of her own. The highlights of the book lie firmly in Sophia’s letters to her sisters and to the India Office as well as her personal diary, her father’s letters, and newspaper clippings. In her own hand, Sophia’s concerns, fears, and joys reveal her voice on matters both pressing and dear. Anand’s research is impressive, but she reports rather than rejuvenates. Still, the subject itself is lively enough. Although the book can be as dry as a textbook, without Anand’s interest and her primary sources, Princess Sophia Duleep Singh and her contributions to the world would remain buried in the manner which British officials had wished it to be. It is a shame that last year’s film titled Suffragette made no mention of this plucky and influential woman who helped shape that period of time when women began to stand tall and break free of some of the constraints under which they were forced to exist. Jeanne E. Fredriksen lives in Wake Forest, North Carolina, where she is the managing editor of a monthly newspaper and is a Books for Youth reviewer for Booklist magazine, a publication of the American Library Association. Between assignments, she writes fiction, hunts for the perfect Bloody Mary, and heads to the beach as often as she can. SOPHIA–Princess, Suffragette, Revolutionary by Anita Anand. New York: Bloomsbury USA bloomsbury.com. anitaanand.com. 432 pages. Courtesy of www.indiacurrents.com
Tags:Maharajah Duleep SinghPrincess Sophia Duleep SinghQueen Victoriasikh historySikh Women