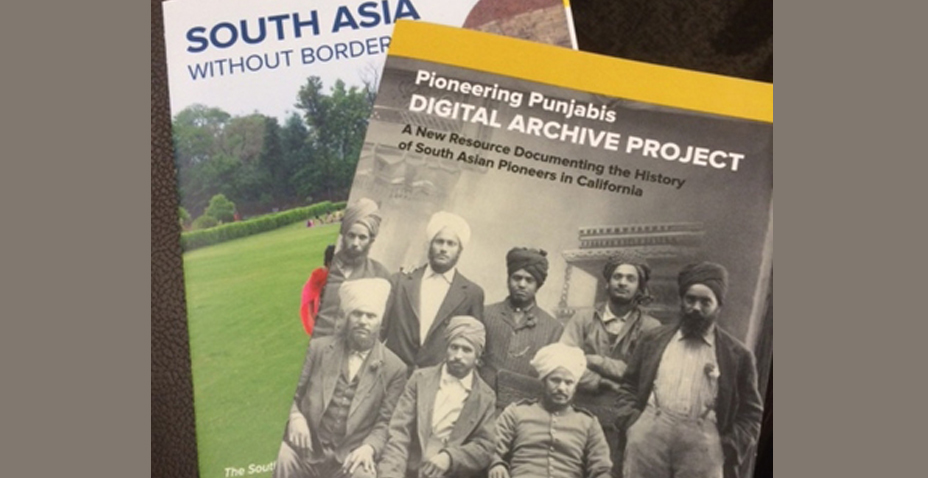 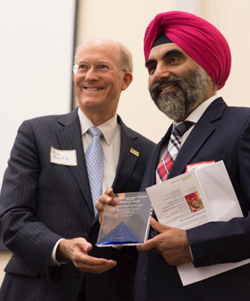 UC Davis interium Provost Kenneth Burtis with Dr. Jasbir Singh Kang, Punjabi American Heritage Society co-founder
“The community has such strong ties to UC Davis, through agricultural innovations from new peach varieties to farming technology,” Ranganath said. “The university has been so integral to their livelihood and so many people from that community have also attended UC Davis.” The archive will be a resource for academic researchers, K-12 educators, and the general public. The Middle East/South Asia Studies program is partnering with the California History-Social Science Project to train K-12 teachers to use the archive in California history courses. Important leaders in the community highlighted Among the dozen people featured in the archive are:

UC Davis Giddha performance members
“Punjabis are a vibrant and influential community in California,” said Khush, who will give the keynote address at the archive launch. “During their 120-year presence here Punjabi Americans have made remarkable contributions to agriculture, technology, engineering, medicine and academic professions,” he said. “The archive is a valuable resource for historians, academicians and the community in general.” The digital archive will also contribute to connecting the ME/SA program to the region’s various South Asian communities. “The ME/SA program is excited to showcase this rich archive of the history and dynamism of the Punjabi community in California,’” said Smriti Srinivas, a professor and director of the program. “We hope to engage with other South Asian communities in meaningful ways in the future.” The archive would not have been possible without the generous support provided by the College of Letters & Science, College of Agricultural & Environmental Sciences, the University Library’s Digital Scholarship Office led by Carl Stahmer, the Middle East/South Asia Studies Program, and a grant from the Andrew W. Mellon Foundation. For more information contact Nicole Ranganath at nranganath@ucdavis.edu – Jeffrey Day, content strategist for the College of Letters and Science. jadday@ucdavis.edu Courtesy of www.ls.ucdavis.edu
Tags:Collaboration with Punjabi communityPunjabi AmericansPunjabis Digital Archive Project