A Brief History Of One Sikh American’s Response To 1984 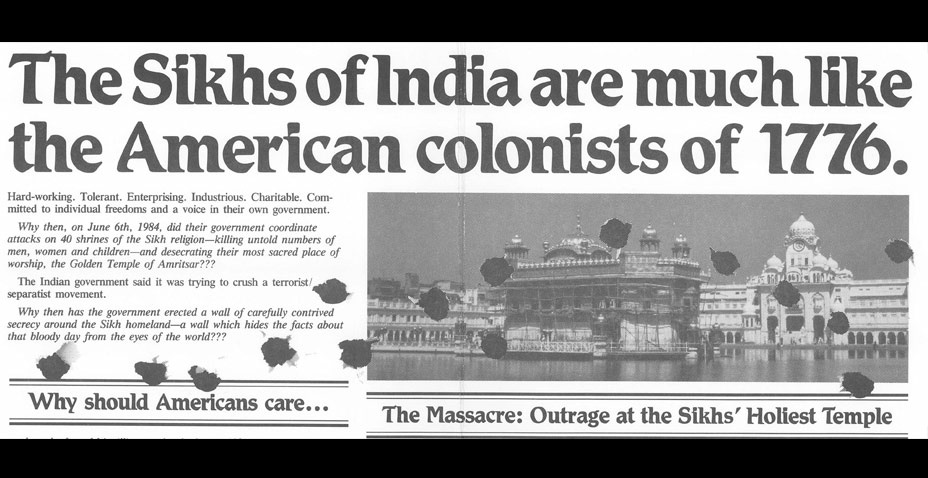 These quotes were first published by the Sikh Foundation in a number of newspapers all over the US in the aftermath of the Operation Bluestar.

American author Maya Angelou states, “The ache for home lives in all of us, the safe place where we can go as we are and not be questioned.”

A kind of garden of what home is blooms inside of all of us; cultivating memories and family gatherings, nursing disappointments and honoring God like pulling up mint and eggplant, re-mixing fertile soil. We water, plant, soil, and repeat not expecting immediate returns, but catch a glimpse of this daily investment shooting up every so often. Our global geography and the family privilege we are born into can also place us in desirable places of safety at least temporarily even when we imagine it so.

Dr. Narinder Kapany remembers the moment when his own garden within flowered as a child. His mother carried an infant Narinder over to look at a painting of Guru Gobind Singh Ji to provide relief from being ill. She expressed, “When you and your brother are better, we will take both of you to the Golden Temple.”

And so they did.

His father took a dip into the Amrit Sarovar, the pool of natural healing abilities Guru Amar Das Ji envisioned as the waters next to which the central place of prayer would be built.

His father asked Narinder’s older brother and then Narinder to join him in the water. Narinder recalls hesitating at first because of not knowing how to swim, but then grabbing his father’s hand and entering into the water. He whispered, “I turned around in my father’s arms and took in the sight of the Golden Temple.”

Dr. Kapany describes our connection to Harmandir Sahib as “a natural affinity we all have”. This cultural and spiritual devotion has a depth that silently names our central place of prayer — home. Once enough harvests pass, and our own gardens take root in us, this spiritual home leads to natural states of preservation and vigilance to keep it alive. This deep groundwork within us honors Harmandir Sahib and the sacred architecture built around it along with what it signifies: a celebration of Wahe Guru, the Creator, and His/Her creation while standing firm in who we are as Sikhs.

In 1982 Punjab, the winds of self-determination gained momentum as Sikhs woke up to their rights as citizens of the state, taxpayers, and an autonomous spiritual people. This led to a groundswell of protest to secure these rights that agitated the Indian government, specifically Indira Gandhi who started to perceive Sikhs as a threat to the Indian nation. Gandhi’s thought process barreled forward to eliminate this perceived political threat – the Sikhs.

In San Francisco, California in March of 1984, Dr. Kapany moved to act with members of the national Sikh community to find some way to stop what was anticipated as “the beginning of the end”. He started by working towards diplomatic efforts to reach and communicate with Indira Gandhi about her plans to attack Harmandir Sahib. 250 Sikh Americans gathered in Washington D.C. to express and emphasize how parallel Sikhs are to Americans and democratic principles to U.S. congressmen and senators.

The Sikh Foundation then worked on a telegram sent directly to Indira Gandhi that stated,

“You are thinking of attacking the Golden Temple. We deeply request you not do that. We can bring a number of Sikhs from the U.S., Canada, and England to assist in going down the list of Sikh complaints in Punjab and working something out between you and them.”

These “complaints” or central grievances of the Sikhs in Punjab included: unfair government taxation which did not return benefits to the state of Punjab, diversion of Punjab’s water supplies to other areas of India, and the lack of formal recognition of the Sikh religion by the Indian government.

There was no response to the telegram, the request for negotiations, and follow-up to the diplomatic efforts in the U.S. But the Sikh Foundation kept at it in collaboration with other community members and organizations.

Dr. Kapany received word that Indira Gandhi traveled to England to gain support of Margret Thatcher for the attack and also traveled to the Soviet Union for their support. These key conversations for international support may have shifted the perception of Sikhs as “Indian citizens” to “terrorists of the state”.

On June 2nd, Indira Gandhi sealed off Punjab borders and sent the Indian Army to attack Harmandir Sahib on June 3rd. The officers and soldiers attacked the temple and people with heavy artillery and chemical weapons for five days.

Across the globe, the Sikh Foundation locked step with other Sikh organizations to create a full-page newspaper advertisement that was disseminated across major U.S. cities titled, “The Sikhs of India Are Much Like the American Colonists of 1776” The ad described the attacks in Punjab, the aftermath, some immediate goals, and Sikh beliefs as a people.

Eight days after the attack, Western reporters were allowed to enter into the Golden Temple for a guided tour.

Numerous quotes from news outlets across the country included :

“All around were signs of killing and destruction – bullet-pocked walls and parapets, minarets with their tops sheared away, marble esplanades still wet from hosing to remove the blood.” — New York times, 6/17/84 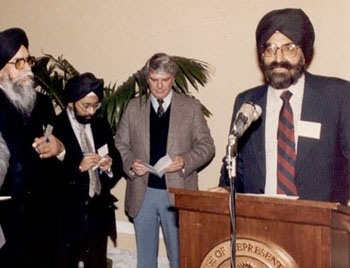 Dr Kapany giving a speach in the House of Representatives

“In sweltering heat and the dust of the battle’s aftermath, black crows and vultures perched on the temple’s balustrades in search of grisly carrion. For the first time in the 400-year history of the Golden Temple, the 24-hour prayer vigil had ceased.” –Time Magazine, 6/18/84

After the attack, Dr. Kapany tried again to assemble a team of 22 U.S. congressmen and senators to visit Delhi and Amritsar, interview people about the attacks, and sent a letter asking for talks to take place. The Indian government’s response was, “It is an internal affair of India, and we do not want any foreigners to come in.” 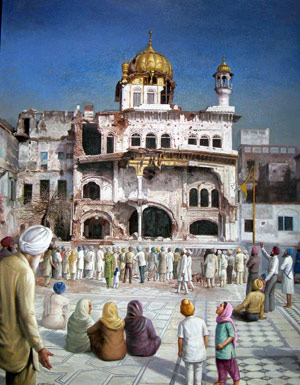 What is admirable about this effort is the consistent and continued struggle to not take “no” for an answer, to continue forward with the work despite the disappointing circumstances.

These series of events left an imprint on Dr. Kapany and his contemporaries, and speaks to the organizing that took place in California as these events unfolded. How geography became irrelevant and the instinct to protect home became a priority for Sikhs who migrated to the United States. They will never forget how these events yanked them out a sense of security and safety from Punjab.

Today, we have thriving organizations such as Ensaaf and The 1984 Living History Project along with theatrical productions like Kultar’s Mime to remind us the work is steady, demanding, and necessary. The work grounds us in the events that took place 31 years ago. And the trauma that ensues even into our present moment as we continue to accept and understand this documented and undeniable loss. A sense of home does not leave us when we move away from a region or country. It occupies a place in our bodies that preserves what is good in the world, what distinguishes right from wrong, and what is worth fighting for.

The burgeoning garden within us will continue to bear witness and break ground for truth-telling and preserving history with each new generation of seeds planted.

The Sikh Foundation International stands with you.

This month,  America celebrates Juneteenth, a commemoration of the moment the last enslaved black people in the United States learned of their freedom on June 19, 1865.

It is on this day that the Sikh Foundation International wants to express its outrage and sadness for those who have been hurt by the legacy of police brutality and systemic racism which exists in our country. We are mortified by the brutal killing of Mr. George Floyd by the Minneapolis Police officers. His tragic death, and other recent inexcusable killings of other innocent African Americans like Rayshard Brooks,  Ahmaud Arbery,  Breonna Taylor, Tony McDade, Sean Reed, and Yassin Mohamed highlight the extensive racial profiling by law enforcement and the criminal justice system resulting from decades of brutality against African Americans rampant in our country, our communities, and even within ourselves.

Guru Nanak Dev Ji taught us to speak out and stand up for the rights of ALL to be respected. Guru Nanak denounced the caste system and preached against discrimination and prejudices due to race, caste, status, and on and on. He taught us that  the presence of the divine is within each human being.  Therefore, we, The Sikh Foundation International, ask you to join us in the fight against systemic racism.

We pledge our continued commitment to fight for  social justice for all, irrespective of color, race, gender, national origin, or sexual identity. The Sikh Foundation International will explore meaningful ways to work with African American artists, authors, museums, & students. We stand true to the egalitarian ideals established by our Gurus, in solidarity with people of all color, and hope to inspire others by growing stronger in Chardi Kala.