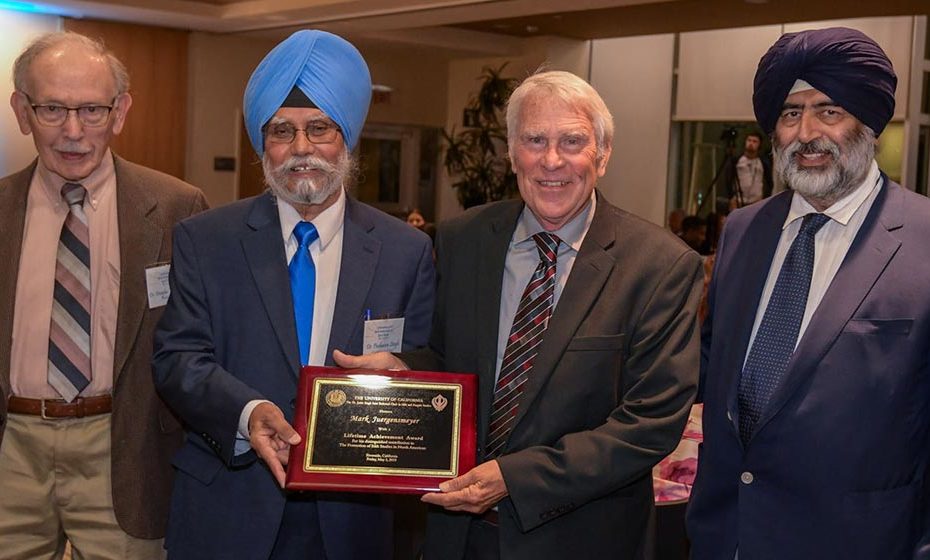 On May 3-4, the largest North American conference yet in the field of Sikh Studies was held at the University of California Riverside (UCR). The Jasbir Singh Saini Endowed Chair in Sikh and Punjabi Studies hosted the 6th Sikh Studies Conference which was convened by Dr. Pashaura Singh. This particular conference landed on the 550th anniversary commemorating the birth of the founder of the Sikh religion: Guru Nanak (1469-1539).  Panel discussions were held beginning Friday morning (May 3, 2019) and concluded Saturday evening (May 4, 2019). Professors and researchers from around the world shared their expertise on a diverse range of topics and approaches within Sikh Studies including philosophy, history, musicology, literature, gender studies, and theology–all revolving around the topic of Guru Nanak and his legacy. Scholars stayed at the historic Mission Inn in downtown Riverside.

Events began Friday with a ribbon-cutting ceremony officiated by Dr. Kiril Tomoff, Associate Dean for Arts and Humanities, that inaugurated the North American debut of the Guru Nanak Art Exhibit displaying the evolution of Sikhism in forty pieces. This exhibition was organized with the collaboration of National Institute of Panjab Studies, Bhai Vir Singh Sahitya Sadan, New Delhi and Dr. Mohinder Singh. One of the exhibits displayed a 19th century painting from the Government Museum and Art Gallery in Chandigarh of a Sufi cloak (khirqa)–with Qur’anic verses stitched into it–bestowed on Guru Nanak during his journey to Baghdad. At the center of the exhibit were over thirty pages from an illuminated manuscript of the hagiographical janam-sakhis which featured major events from the life of Guru Nanak. The B-40 Janam Sakhi miniatures were presented in collaboration with the Phoenix Art Museum and Dr. Parvinder Singh Khanuja. Circling this centerpiece were paintings and photographs of Sikh art, ceremonies and artifacts, all to the sound of a plucked rabab–the first accompanying instrument to Nanak’s divinely inspired lyrics. Outside the art exhibit, a book exhibition was set up by Bicky Singh of Sikhlens Organization which displayed several current monographs in Sikh Studies.

Through papers presented, scholars contributed to this conference’s theme: bringing “new perspectives, reassessments and revivification” to the study of Guru Nanak and his legacy. Following an introduction by Dr. Pashaura Singh, Dr. Arvind-pal Singh Mandair delivered the keynote speech on “Guru Nanak in the Arena of Global Philosophies.” As usual, Mandair’s approach navigated the Western intellectual tradition with aplomb while decentering Europe as a philosophical epicenter in favor of the rich philosophical tradition within Sikhism. Panel discussions then began with a discussion of Philosophy and Religious Theory by Puninder Singh and Dr. Sujinder Singh Sangha, as well as a panel on Secularism and Identity by Dr. Amritjit Singh and Dr. Nirvikar Singh. Following lunch, a specific panel was held on Guru Nanak in Sakhi literatures by Dr. Harjeet Singh Grewal, Dr. Balbinder Kaur Bhatti and Dr. Toby B. Johnson. Our doctoral student and respondent Gurbeer Singh was fascinated by Grewal’s reinterpretation to the Sajjan Thug Sakhi and Johnson’s ethnographic research on the teaching of Guru Nanak’s life in a secluded Gurdwara in the United States. The fourth and final panel of the day, “Crossing Borders,” was chaired by UCR’s Dr. Muhamad Ali and exploring religious boundary-crossing between Islam and Sikhism especially, which has been lost as the common connections are made between Hinduism and Sikhism. Dr. Gurharpal Singh’s paper on “The Limits to Control of Sacred Spaces in Pakistan” was presented by Dr. Arvind-pal Singh Mandair, while Dr. Sara Grewal explored the Partition narratives in her presentation. Haroon Khalid’s presentation on historical Gurdwaras in Pakistan highlighted the Sikh-Muslim connection as he spoke to how “the Pakistan government is actively seeking to renovate and open up historical gurdwaras to Sikh pilgrims.” Some of these gurdwaras were sites of interreligious solidarity as “the local Muslim population upheld, in one way or another, the sanctity of the gurdwara, by either treating it as a sacred space due to its association with Nanak, or by appropriating it in a Muslim milieu.” Khalid’s research rounded out the first day panels.

On the first night of the conference, the participants and members of the broader local Sikh and UC Riverside communities shared a celebratory dinner and awards ceremony at the UCR Alumni Center. All were warmly greeted and congratulated by Dr. Kim Wilcox, Chancellor of UCR, Dr. Milagros Peña, Dean of the College of Humanities, Arts, and Social Sciences (CHASS) at UCR, and Dr. Harkeerat Singh Dhillon, Advisor of UC Riverside School of Medicine and the previous Trustee of the UC Riverside Foundation. Dr. Mark Juergensmeyer, Distinguished Professor of Global Studies, UC Santa Barbara, gave the second keynote of the day, emphasizing over and over that–in spite of being a scholar of Sikhism — he was “not Pashaura Singh” as a respectful nod to the depth and breadth of research in Sikh Studies that Dr. Singh has provided over the years. The night included five honorees: Dr. Mark Juergensmeyer, Dr. Mohinder Singh (Director, National Institute of Panjab Studies, Bhai Vir Singh Sahitya Sadan, New Delhi, India), and Dr. Pal Ahluwalia (Vice Chancellor and President, The University of the South Pacific, Suva, Republic of Fiji) were presented with Lifetime Achievement Awards for their distinguished contribution to the promotion of Sikh Studies in North America, India, and the Diaspora. Dr. Nikky-Guninder Kaur Singh (Crawford Family Professor of Religion & Chair of Religious Studies Department, Colby College, Waterville, ME, USA) was honored with a Lifetime Achievement Award for her distinguished contribution to the Feminist Interpretation of the Sikh Tradition. Dr. Gurcharanjit Singh Attariwala (Nanaimo, BC, Canada) was presented with a Lifetime Achievement Award for his distinguished contribution to Sikh Activism and the Process of Renovation of Darbar Sahib at Kartarpur (Pakistan). This was followed by Dr. Pashuara Singh’s daughter, Dr. Manpreet Kaur Singh, who not only presented at the conference, but as her father’s birthday coincided with the conference, she surprised Dr. Singh with a moving tribute to his lifetime of work as a scholar, a Sikh, and as a father. 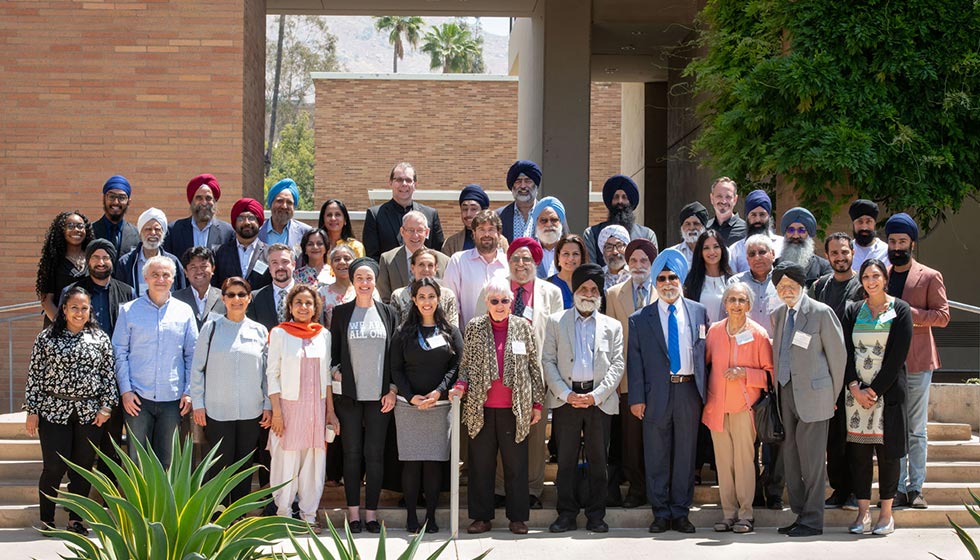 The second day began with the third Keynote Speech by Dr. Pal Ahluwalia, followed by panels by Dr. Lou Fenech and Dr. Nikky-Guninder Kaur Singh, who delivered their latest research in the panel “Cross-cultural Interactions.” Dr. Singh Kaur delivered a characteristically rousing talk on the “Sufi Delicacies” found in Guru Nanak’s teachings, filling in an otherwise neglected degree of communication between Sikhism and Islamic mysticism. Dr. Balbinder Singh Bhogal brought his characteristic intellectual rigor to navigating mystical hermeneutics in Sikhism, eliciting no shortage of praise from Ph.D. student and respondent, Adam Tyson on Saturday’s panel. Dr. Eleanor Nesbitt’s paper on “Guru Nanak in the writings of western women” was read by Dr. Corinne Knight, while Dr. Opinderjit Kaur Takhar explored the contemporary issues and challenges in the Panth.” The seventh panel explored “Guru Nanak in the Music” with musicologists Dr. Inderjit Kaur, Dr. Francesca Cassio, and instructor of Theological Studies Dr. Nirinjan Kaur Khalsa. This was a welcome musical interlude from the top musicologists in Sikh Studies, as the unstruck melodies given voice by Guru Nanak were explored.

Dr. Robert  Cathey (respondent to keynote speeches), who has been attending conferences since the seventies, gave a glowing review, saying “your Religious Studies Department, the University, and Mission Inn made my brief time with you restorative and filled me with hope for the future” adding that “your students, faculty, and caring staff who made me feel welcomed like a long lost student into your academic home.” The hope he spoke of was due to “a new generation of brilliant young Sikh scholars who are engaging new publics around the world with Guru Nanak’s life and teachings.”  Dr. Cathey’s point is well taken, and indeed the conference was joined by students from UC Riverside, Cal Poly Pomona, UC Irvine, UCLA and the University of British Columbia. For most of these students, it was their first time attending a Sikh Studies Conference. A graduating senior and first time attendee from UCLA, Manpreet Kaur Singh, recalls how “the art exhibition was an experience of its own as it not only presented our beautiful history, but also allowed individuals to experience a spiritual connection for themselves and appreciate the arts and Sikhi. As an undergraduate, it was exciting to see research being done in this field and conference allowed for a space to network with such amazing scholars. I’m grateful to the staff and everyone invoked in helping out on this conference, looking forward to next year!” The fact that the conference elicited such praise is in no small part due to the tireless efforts of the staff of UCR’s Multidisciplinary Financial and Administrative unit, especially Francesca Moreira, Geneva Amador, and Diana Marroquin. One of the long-term goals for the Sikh Studies Conference is to seek to engage scholarship with the greater Sikh community. We were fortunate to be joined by Jaswant Singh Jhawer, President, and Kashmir Singh Randhawa, Secretary, and Dr. Surinder Singh Kohli of the Sikh Center Gurdwara in Riverside.

The final panel, “Sikh Activism, Reassessments and Revivification,” took a different approach than the other panels as it was full of activists rather than scholars. The purpose was to bridge the gap between scholars and the community to depict an accurate image of Guru Nanak’s message. Dr. Gurcharanjit Singh Attariwala and Tejpaul Singh Bainiwal shared the little known story about the renovation process for Darbar Sahib (Kartarpur) that was started by Dr. Attariwala in the early 1990s when it was in a state of ruins. To close out the panel, Dr. Manpreet Kaur Singh and Harbir Kaur Bhatia focused on the implementation of Guru Nanak’s message in the contemporary period. Following this, scholars, organizers, and volunteers were invited to a sumptuous dinner at Dr. Harkeerat Dhillon’s house to officially conclude the conference.