Why is the Maharaja Holding a Flower? 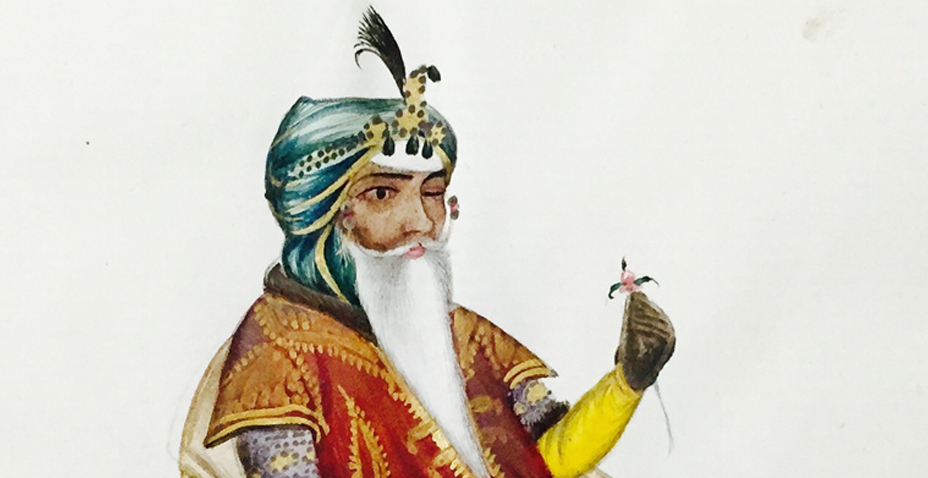 In my experience, a painting that is difficult to make sense of, to put in order, to relate to, is often dismissed as abstract. 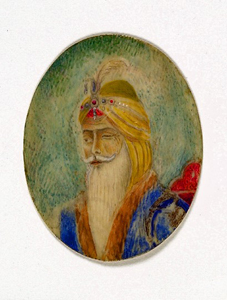 In the case of miniature paintings, the abstract element is very subtle and often lost in the details. Lost, unless, you look very carefully. When I sit down to look at a miniature of Maharaja Ranjit Singh, I often begin by looking with an alert eye and an active imagination. I gaze at Ranjit Singh’s turban with a highly ornate plume while imagining non-stop how must’ve his helmet of gold, iron, and brass settled around his head and face. I notice the detail of his deformed left eye, always painted to remind us of Ranjit Singh as an undefeated warrior even against the lethal nature of smallpox. And just in case you didn’t know this small detail about his medical history, you would think the Maharaja is painted winking at the audience.

My eye wanders around the details of Ranjit Singh’s beautiful robe and follows the movement of the relaxed posture he has shown to take in the painting. I wonder what a leader and ruler like him thought of when he sat down and rested his feet on a footstool. Does he feel a sense of accomplishment and pride come over him? I also wonder, in between running an empire, checking up on his army, and talking to foreign delegations, when did Ranjit Singh ever find a moment to sit in such a relaxing manner. Is it possibly when he had just annexed most of the territories belonging to the eleven other Sikh Misls? Or was it at the joy of possessing the Koh-i-Noor? 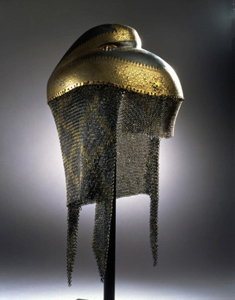 In my visual journey, my eye eventually moves to Ranjit Singh’s hands. In the painting, I notice Ranjit Singh is shown to be holding a handkerchief in his left hand. I doubt Ranjit Singh was battling a cold or allergies so Why is the handkerchief placed in his hand? My first guess is the Maharaja’s attempt to battle the heat and resulting precipitation as we all do when we travel to Punjab during the summer months. However, my best guess is handkerchieves, like ornate plumes or umbrellas, symbolized royalty, a role well-embodied by Ranjit Singh

Ranjit Singh’s miniature painting leaves me with one final question. Why is he holding a flower in one hand? Such a tough ruler depicted in a position of extreme power is holding a flower in his hand. Suddenly, a scene from a Bollywood film with the lead actor taking in the smell of a rose flashes in front of my eyes. Is the Maharaja just entertaining his sense of smell? I guess not. 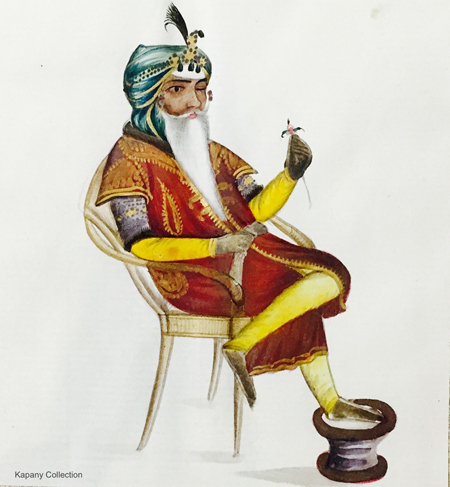 According to art historians, a flower held in one hand signified cultural sophistication often balanced with power symbolized by a sword. Ranjit Singh’s power was unquestionable. Striving continually to assemble a large expanding Sikh Empire, Ranjit Singh’s ambitions as a ruler were very much evident. Even in the operations of his empire, Ranjit Singh employed the help and counsel of many non-Sikhs and Europeans. Perhaps Ranjit Singh is painted holding a flower to signal the welcome of all different types of people and cultures to his Sikh empire. He did not prohibit religious practices or call for intolerance like the Mughal emperor Aurangzeb. With the power of his sword, Ranjit Singh conquered ambitions of a successful and vast empire. And with the sweetness of a flower he demonstrates an open mind towards the world and its ideas. I have a feeling a lot can be learned and applied to our sense of balance in the world today from the answer to “why is the powerful Maharaja holding a flower?”

Rupy C. Tut, also recognized as Art By Rupy, is a visual artist and the current artist-in-residence at the Sikh Foundation. Her work with the Kapany collection of Sikh Fine Art has included cataloguing and researching many pieces of art from the 19th century. In her research, she enjoys sharing her own experiences and interactions with pieces of such significant history while striving to make them relevant today. This article is based on a painting from souvenir albums mentioned in a previous article titled “A Souvenir from the Past: Painted memories of the powerful and the ordinary in 19th century Punjab.”