Documenting the Holocaust of 1947 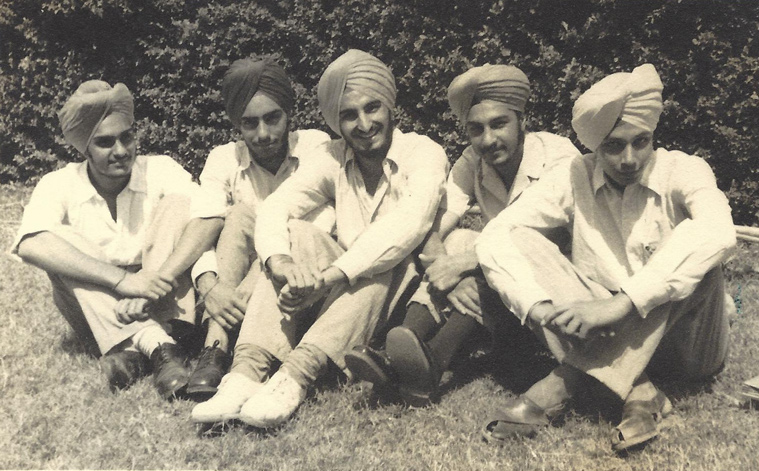 Narinder Kapany, center, sits with friends in India around the time of the 1947 Partition that left about 1% of the worlds population homeless.

Now in his late 80s, Palo Alto businessman Narinder Singh Kapany holds searing memories of the days surrounding the 1947 Partition of India, a violent cataclysm that created more than 14 million refugees and left an estimated one million dead.From his family’s home in Dehradun, India, he could hear the shrieking and see the fires one night as local Muslims were attacked for being on the wrong side of the border.

“It was bedlam,” Kapany recalled in a recent interview in his Palo Alto office. “The next morning I went down there and one of the most horrible things I saw was about 15 Muslim girls, killed and being lifted onto a truck to take them away. I saw this with my own eyes. It was utterly disgusting, seeing those lovely girls killed and being dragged onto a truck.”

Kapany is one of thousands of Muslims, Hindus and Sikhs who have shared their firsthand accounts with the nonprofit 1947 Partition Archive, a Bay Area-based organization that aims to capture and preserve the multitude of stories from survivors in the Bay Area, India, Pakistan and Bangladesh under the guidance of founder Guneeta Singh Bhalla and key advisers Stanford professors Priya Satia and Shaili Jain.

Bhalla said the organization started locally, collecting oral histories from residents in Palo Alto, Stanford and the greater Bay Area and has since expanded to India, Pakistan and Bangladesh. The group has conducted close to 3,000 interviews, she said.

Bhalla — who grew up in India hearing her grandparents talk about how their lives had been irrevocably changed by the Partition, which left about 1 percent of the world’s population homeless — felt the events were neither well-understood nor officially recognized. A physicist now living in San Francisco, she said that when her amateur efforts to record people’s memories of Partition began to snowball, she put her scientific career on hold to work full-time documenting the stories of survivors, most of whom are now in their 70s or older.

“It’s just something that needed to be done — the stories of my grandmother and others needed to be told, to give them legitimacy and give inspiration to the modern generation,” Bhalla said. “When I was growing up in India, usually the independence of India and Pakistan was celebrated but the Partition and all its traumas were not really even mentioned in the books, not discussed formally.”

Despite the commonly held narrative that Partition caused Hindus, Muslims and Sikhs suddenly to begin hating and killing one another, a different picture emerges from the firsthand accounts, she said.

“People didn’t usually attack people they knew,” Bhalla said. “People protected their neighbors who were in the opposite group. Religion did get politicized here, but what seems to have happened is that the British left so hastily that the police and military became chaotic. Civil society broke down and the have-nots went after the haves.”

The day after the fighting broke out in Dehradun, Kapany recalled, a mob came to his home demanding that he hand over a Muslim servant who had lived with his family for decades.

“They were shouting and said, ‘You have a Muslim living here, give him to us,'” he recalled. 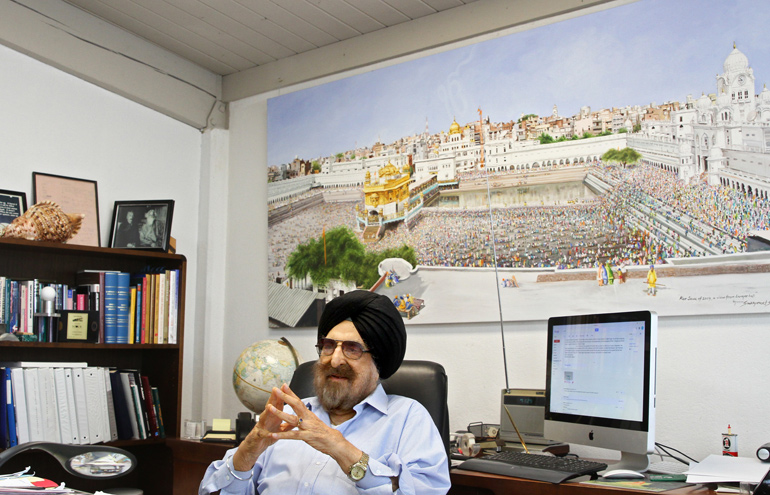 Narinder Kapany, in his Palo Alto office where a large painting of the Sri Harmandir Sahib, known as the “Golden Temple” in Amritsar,India,hangs above his desk as a reminder of his homeland. Kapany, who now lives in Woodside,survived the 1947 Partition of India. Photo by Veronica Weber/Palo Alto Weekly

Kapany said he told them he was prepared to use his double-barrel gun to protect the servant.

“I think there were some wise people there who found that I meant it,” he said. “I wasn’t going to let anybody hurt him.”

The following day, Kapany said, he witnessed a British soldier shoot dead a young boy who was holding a toy he had taken from a nearby shop.

Kapany, a physicist who went on to pioneer the field of fiber optics, settled in Palo Alto in 1960, where he has founded a series of technology companies, taught at the University of California and become active in philanthropy.

“I think what (the Partition Archive) is trying to do is interesting not only from the Indian scene but for the populations that today are moving in huge quantities,” he said. “There’s a lot to learn. Right now, look at the number of people leaving Syria and coming to Europe. Imagine what’s going to happen to those people and the effect of that on the European situation.”

As a 6-year-old boy, Ali Shan witnessed the killing of his mother, older brother and two aunts during a raid on their Muslim village at the time of Partition.

Now a 76-year-old resident of Fremont, Shan haltingly recounts details of the painful memory with a purpose — so that his story of survival and forgiveness might help other people might help others struggling with tragedy find peace.

“Although my story is full of tragedy and some adventures as well … I have made peace with losing my family as well as my childhood,” said Shan, who eventually moved to California and still rises before dawn each morning to open his San Jose gas station by 5 a.m.

“I’ve learned to forgive … and I do not have any hate or grudge against anyone. I respect all religions of everybody. That’s what I am today, and that’s why I survived as well,” he said.

Hayward resident Fauzia Parviz does not have a conscious memory of the Partition. But she was there — in utero — when her Muslim family suddenly found itself on the wrong side of the border and her father’s thriving lumber business and furniture factory in Amritsar was looted and burned to the ground.

The extended family took refuge in the house of her grandfather in a Muslim area near Amritsar considered safer. Even when Amritsar was named part of India with the announcement of the border, Parviz’s grandfather, who had always lived peacefully with other sects, clung to his home, believing the violence would pass.

But the 17-member family fled in haste to the Pakistan side of the border one month after Partition after being warned by the military that they would be attacked the next day. They arrived at an overflowing refugee camp in Lahore, where Parviz’s 3-year-old sister contracted typhoid. Later, an uncle found them and provided shelter in Rawalpindi, where Parviz was born that November.

“My mother tells me it was a very cold night,” Parviz said. “All the baby gear she had lovingly made had gone up in flames with her house in Amritsar. She wrapped me in an old towel because she had nothing.”

Parviz’s father was able to rebuild his business in Rawalpindi and within a decade the family had cars, servants and a house in the hills, she said. But her grandfather and some others in her family, including an uncle who died by suicide, never recovered from the losses they suffered. She grew up hearing her grandparents’ lament that the grass had been greener and the well-water sweeter back home in Amritsar.

The sectarian violence that had surrounded them during Partition, Parviz said, “was just the way humans behave in a time of crisis. There was no enemy. Anywhere in the world humans are like that.”

For more information on the 1947 Partition Archive, go to 1947partitionarchive.org.