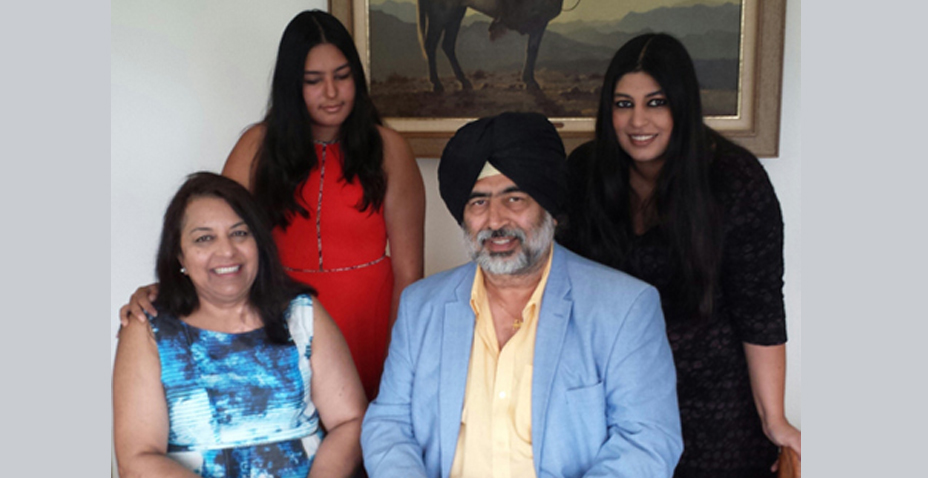 Dr. Harkeerat and Deepta Dhillon (seated, right to left) have established a research award to support Ph.D. students engaged in Sikh and Punjabi Studies in the arts and humanities. Pictured with them are daughters (l-r) Avika and Bani.

By Bettye Miller RIVERSIDE, Calif. – Dr. Harkeerat S. and Deepta Dhillon, longtime supporters of the University of California, Riverside, have endowed a research award to support doctoral students engaged in Sikh and Punjabi Studies in the arts and humanities. The $100,000 gift announced today by UC Riverside will help attract graduate students with an interest in Sikh and Punjabi culture, and support fieldwork on Sikh communities in the United States. “Dr. and Mrs. Dhillon have been loyal supporters of the university for many years and it has been a pleasure to get to know them and experience firsthand their generosity of spirit and friendship since I arrived on campus a year ago,” said Milagros Peña, dean of the College of Humanities, Arts, and Social Sciences. “This gift is a testament to their commitment to higher education, their passion for the arts and humanities, and their desire to expand the knowledge base about Sikh and Punjabi culture. Moreover, the Dhillons are setting a wonderful example for their daughters, Bani and Avika, about the positive impact that philanthropy can have in their community.” The Harkeerat and Deepta Dhillon Endowed Research Award for Sikh and Punjabi Studies in the Arts and Humanities will provide much-needed support for dissertation research and writing on arts and humanities topics that relate to Sikh and Punjabi culture, said Pashaura Singh, professor and Jasbir Singh Saini Endowed Chair of Sikh and Punjabi Studies, and chair of the Department of Religious Studies. “We are grateful to Dr. Dhillon and his wife, Deepta, for their generous gift. This award will help UCR attract new graduate students interested in Sikh and Punjabi music, history of Sikh settlers in California, film and media studies, and ethnographic fieldwork on various Sikh communities in the United States,” he explained. “Dr. Dhillon has contributed energetically in many ways to build the new program in Sikh Studies at UC Riverside. His selfless and untiring support has put the field of Sikh Studies on the academic map of North American universities.” Dr. Dhillon, a prominent Riverside orthopedic and hand surgeon, and Deepta Dhillon, who worked as an architect in India and London, said the graduate student research award will raise the profile of UCR nationally in the field of Sikh and Punjabi studies. “UCR is justly proud of and known nationally for its diverse student population,” said Dr. Dhillon, who has been a member of the UCR Foundation Board of Trustees for 14 years and helped raise the funds needed to launch the endowed chair in Sikh Studies in 2008. “We believe that establishing this award will enhance the belief that this is an educational institution that recognizes diversity and teaches diversity. The fact that an institution with the reputation of UCR’s is supporting this kind of research will give the Sikh community in the United States confidence that mainstream America wants to know about us.” The fifth-largest organized religion in the world, Sikhism has more than 25 million adherents. About 80 percent of the world’s Sikhs live in the Indian province of Punjab. More than 500,000 live in the United States, about half of them in California. Sikhs have lived in the U.S. for more than a century, but their culture and religious practices remain unfamiliar to a majority of Americans. Sikhism is a monotheistic religion that originated in the Punjab province of India about 500 years ago. Sikhs believe in the equality of all people, emphasize the family, and advocate service to others and living in the world without being worldly. Dr. Dhillon said he hopes that graduate-level research supported by the award over time will embrace all aspects of Sikh culture, from music and history to the Sikh diaspora and the influence of Sikhs in global politics. “It’s important to add this dimension to Sikh Studies,” he said. “We hope this gift will spread the global influence of UCR and stimulate more positive energy for the university. When you fund something like this, you can see what our graduate students can do, and their potential. We want to give back to this community, and pass something on to the next generation of teachers and leaders.” Courtesy of www.ucrtoday.ucr.edu
Tags:Dr. Harkeerat and Deepta DhillonRiversideSikh and Punjabi ResearchUniversity of California