Drinking from Love’s Cup: Surrender and Sacrifice in the Vars of Bhai Gurdas Bhalla by Rahuldeep Singh Gill 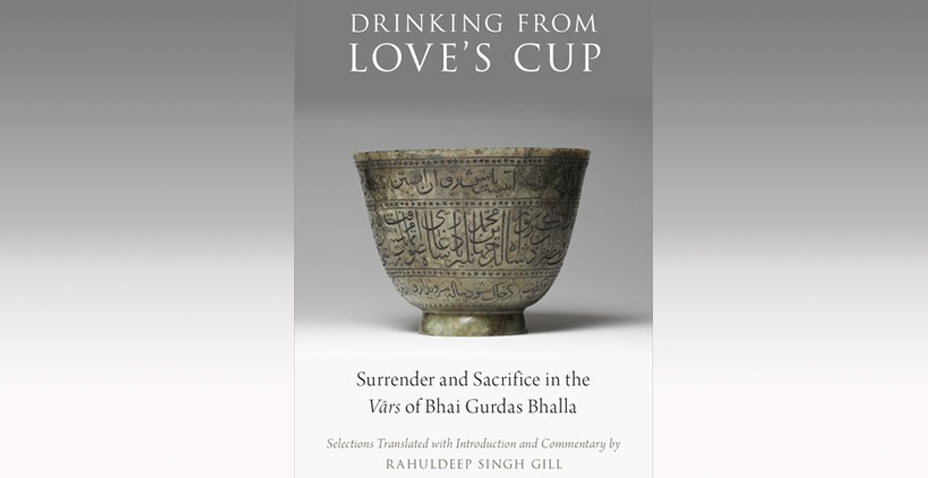 Rahuldeep Singh Gill’s Drinking from Love’s Cup is a welcome scholarly introduction to the poetic compositions of Bhai Gurdas, whose writings are central to understanding how Sikh intellectual and ethical traditions developed during the seventeenth century. Closely related to the family of the later Gurus, Bhai Gurdas is also famous for having served as the scribe for an important manuscript copy of the Sikh scripture. Scholars frequently use his verses as valuable primary sources. Amazingly, despite the central role occupied by Bhai Gurdas in Sikh history, very few English scholarly studies of his works exist, although translations of varying quality are available in print. There are some notable Panjabi studies as well as edited anthologies of the Bhai Gurdas’ work, but these are not accessible for most general readers. Gill’s work is important, both for the scholarly analysis of the manuscripts of Bhai Gurdas’ work, as well as for the useful commentary and translation of selected vars of Bhai Gurdas offered in this book.

Gill approaches this subject with incisive clarity, breaking from the majority of earlier scholarship about Bhai Gurdas. Garnering the evidence that points to the dating of Gurdas’s compositions in the seventeenth century, rather than the sixteenth, he breaks with the long-held views shaped by eighteenth-century hagiographic texts about the earlier dating of Bhai Gurdas’s life and works, and one that aligns with historians such as J. S. Grewal (11-13, 36). Significantly, this is based on a close paleographic examination of the early manuscripts associated with Bhai Gurdas, all of which are undated. This period corresponds with the beginning of the Emperor Jahangir’s ascension to the Mughal throne and the execution of the Fifth Sikh Guru, Guru Arjan. By arguing for a later date, Gill also suggests that while there is insufficient evident to gauge whether Bhai Gurdas personally witnessed the torture and death of the Fifth Guru, his compositions were certainly informed by the deep trauma experienced by the Sikh community by this event (26- 36). Further, the pressures created by other claimants for the Sikh Guru’s role, also forged Bhai Gurdas into a skilled and unrelenting supporter of Guru Hargobind’s right to lead the Sikh community in those troubled times (31, 230-232, 247-248). While the dating controversy may likely continue, Gill’s focus on locating and reading important manuscripts as evidence is certainly a step in the right direction.

The translations and scholarly commentary on the thirteen vars selected for publication also invite readers to think about Bhai Gurdas’s work from useful literary, cultural, and historical perspectives. Gill persuasively draws on the wider connections between the images deployed by Bhai Gurdas, most notably the divine intoxication of those who have drunk from “love’s cup,” or piram piala, to note the resonance this imagery bears with that of love and martyrdom in Sufi traditions (48-55). Gill also connects the very genre in which Bhai Gurda wrote prolifically, the var, a folk genre devoted to martial and spiritual themes, as one ideally suited to “self-giving sacrifice,” and to inspire and console the Sikh community, in the aftermath of recent tragedies (45). Here Gill’s elegant linkages between the elite literary and evocative popular themes in Bhai Gurdas’s poetry is very clear. Indeed, the translations and commentary, while remaining accessible to a general reader, point out the allusions to Persian words and themes, Vaishnava devotional ideas, popular bardic tropes, as well as devices derived from elite Sanskrit works. For all these reasons, this book can be used in classes about Sikh Studies, as well as classes devoted to South Asian or Panjabi literature, history, and religions.

Finally, while Gill modestly suggests his translations are “efficient (xii),” they offer at present the most mellifluous English rendering of the work of this important Sikh scholar and poet. Compare for instance, Dr. Jodh Singh’s far more serviceable translation of Var16, pauri11, which details the blessings of communal worship for the loyal Sikh or gurmukh: “the pleasure fruit of gurmukhs is the holy congregation whereby merging the consciousness in the Word that invisible Lord is visualized. In the holy congregation, the unbreakable cup of love is drunk by becoming tolerant (398).” Gill’s translation more clearly conveys the literal meaning while lending credence to the larger analytical argument put forward in this book regarding the nature of self-sacrifice and divine intoxication: “Gurmukhs seek the fruit of joy in the holy assembly; merged with the word they speak the unspeakable/ With love’s cup, they bear the unbearable (142).”

Text, Transliteration, and Translation, Vol. I. Patiala: Vision and Venture.

Read another review of Drinking from Love’s Cup