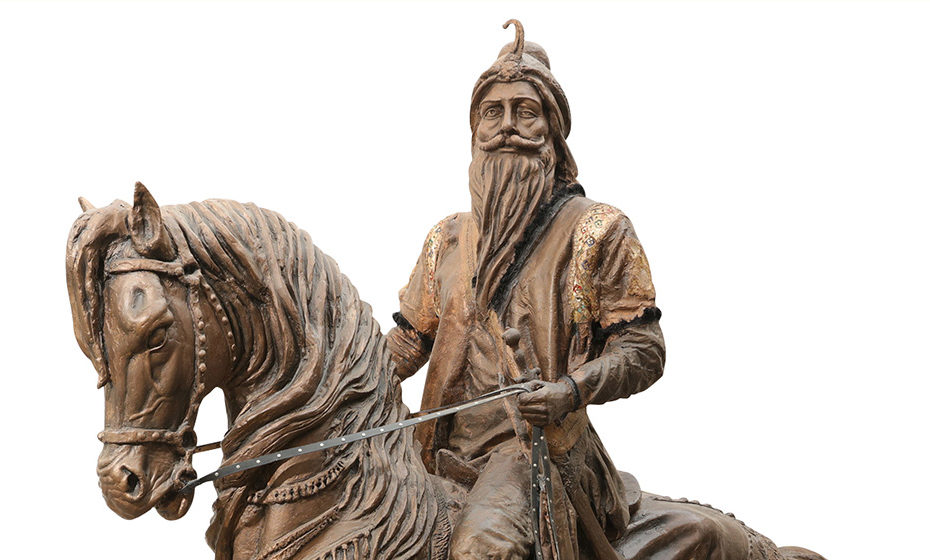 By Bobby Singh Bansal
As a writer and historian, I have been visiting Pakistan since 1989, for research on Sikh history. During my numerous visits to Pakistan, I had noticed that major Sikh structures were vanishing each time I visited; they were either demolished or merged with existing Islamic monuments such as mosques. In 2003, I set up Sarkar Khalsa Foundation UK, basically to preserve and promote Sikh heritage and culture in Pakistan, and since then we have restored several Sikh structures in Pakistan. These include the samadhi of Maharaja Sher Singh, baradari of Sardar Mahan Singh at Gujranwala and the British obelisk at Chillianwala, site of the Anglo-Sikh Wars of 1849, in collaboration with the British High Commission, Islamabad in 1998.

My passion had always been on the reign of Maharaja Ranjit Singh, and on number of occasions I would dwell on the glorious past sitting outside the tomb of the Maharaja in Lahore, reminiscing of his opulent court and secular reign. But in Pakistan, there was not one structure that commemorated Maharaja Ranjit Singh’s legacy. In 2008, during a visit to St Tropez, France, while I was researching on the European mercenaries that served at the Court of Lahore, I mentioned to Monsieur Henri Prevost (descendant of General Allard) that something was missing in the main square. He said “what” and I replied by saying “there should be a bust of the Maharaja opposite the bust of General Allard”. Henri Prevost thought it was a brilliant concept, and we should plan installing a bust of Maharaja Ranjit Singh in St Tropez, to commemorate the unique relationship of his ancestor with the Maharaja of Lahore. In 2016, our project became a reality and we proudly unveiled a bust of the Maharaja, which was generously gifted by the Punjab Government by Prakash Singh Badal. A small bust of Bannu Pan Dei, the wife of General Allard was also unveiled and so this completed the link between Lahore and St Tropez in France.

The French project led to the Italian project, when on 26 May 2019, a bronze bas-relief depicting Maharaja Ranjit Singh and General Rubino Ventura was unveiled outside the ancestral mansion of Ventura’s birthplace in Finale, near Bologna. General Ventura along with General Allard both had arrived in Lahore in 1822, and served the Maharaja in modernizing the Sikh army to European standards. The unveiling ceremony was attended by the large Italian Sikh community and local officials from the municipal of Finale. Now we had linked Italy with Lahore.

The Lahore project, started when I took Raj Kapany, a trustee of the Sikh Foundation (USA) on a personal visit to Lahore in 2016. It was while sitting outside the café, opposite Mai Jinda’s Haveli, discussing the reign of Maharaja Ranjit Singh and the sites we had visited, Raj said why don’t I do what I had done in St Tropez! I thought he was joking, and I had always been interested in doing something in Lahore to commemorate his legacy, stating that a statue of the Maharaja was needed in Lahore. We both discussed it, and to be honest, Raj motivated me in realizing the importance of having a permanent structure dedicated to the Maharaja’s reign. So we started this project in 2016, we both started thinking what was appropriate, I had seen the statues of the Maharaja in India, which usually were out of proportion or never resembled his actual appearance. After months of ironing out the details, we had decided that a life-size statue was needed, a budget had been set and the question was, how we were going to obtain permission and who was going to produce it? I used my Pakistani contacts that I had forged since the last 20 years, and met key officials from various government departments that were vital in procuring moral and logistical support along with various permissions. In September 2016 and March 2017, I revisited Lahore to meet officials of the Walled City of Lahore Authority (WCLA), Department of Archaeology and Punjab Heritage Board and discussed our project proposal. Key question was where the statue was going to be installed? Certain officials were adamant it should be placed inside the Sikh gallery, which houses the Princess Bamba Collection but I was determined that the Maharaja had to be placed outside in an open area but within the fort. In the end, the project was approved unanimously, despite the odd reservations from certain officials, and to my delight, the Director General – Mr Lashari also agreed to have the statue placed outside Rani Jinda’s Haveli, which was a coup on our part. Despite the delays, an MOU was finally signed between WCLA (Punjab Government), Department of Archaeology and S.K Foundation UK, on July 2017. 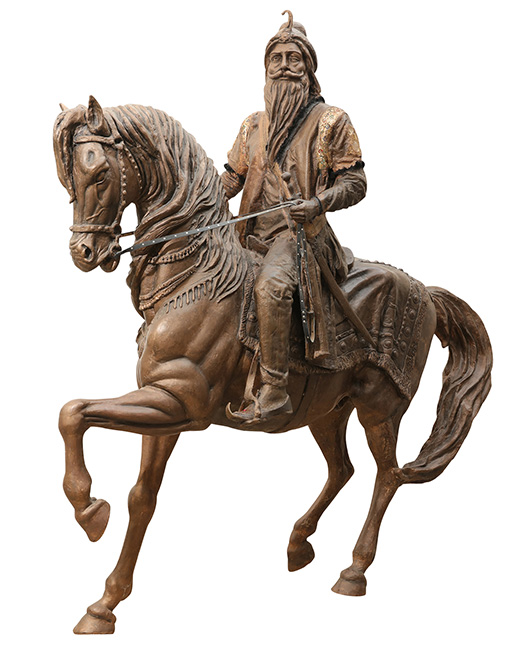 The life size statue of the Maharaja is first of its kind in Pakistan. Having met a few sculptors in Pakistan,it was decided that the statue be sculpted by local talented artists from the National College of Arts and the Naqsh School of Arts, Lahore, under the guidance of Najam Sheikh and Asif Zaheer, our co-ordinators and the Fakir Khana museum. The statue stands 10 feet in total elevation and took nearly a year to complete due to circumstances beyond our control. The intricate details of the Maharaja depicted on the sculpture have been meticulously crafted to make sure his portrayal was a true likeness, which had been taken from a painting commissioned by General Paolo Avitabile by French artist Alfred de Dreux in 1838. The authorities have also installed special lighting and when the statue is lit in the evenings, the Maharaja dazzles. Three inscriptions in brass have also been installed in English, Urdu and Gurmukhi depicting the life of the Maharaja. In the sculpture, the Maharaja is sitting on his favourite Arabic horse that was very intelligent named ‘Kahar Bahar’, which was a gift by Dost Muhammad Khan (founder of the Barakzai dynasty and prominent rulers of Afghanistan during the First Anglo-Afghan War).

Despite the long delays, the heated discussions between me, Raj and other officials, on the 27 June, 2019, our vision and dream was realized when the statue of the great Maharaja of Punjab was finally unveiled to the world in front of a media frenzy, on his 180th death anniversary. Indeed history had been made by all of us. We had finally brought back the Maharaja to where he belonged – Lahore. The statue has been gifted to the people of Pakistan to forge a unity of lasting friendship and to promote peace and religious tourism in Pakistan, by our benevolent donors Mandeep Arora, Akrum Sheikh, (both from the US), Mahmood Ishaq (Dubai) & Vikram Sethi (UK). This monumental project has now led to other potential projects in Pakistan, such as the Nalwa Project at Jamrud and the Sikh Memorial associated with the Anglo-Sikh Wars at Gujrat.