50 Years of the Sikh Foundation: The Pride and Promise 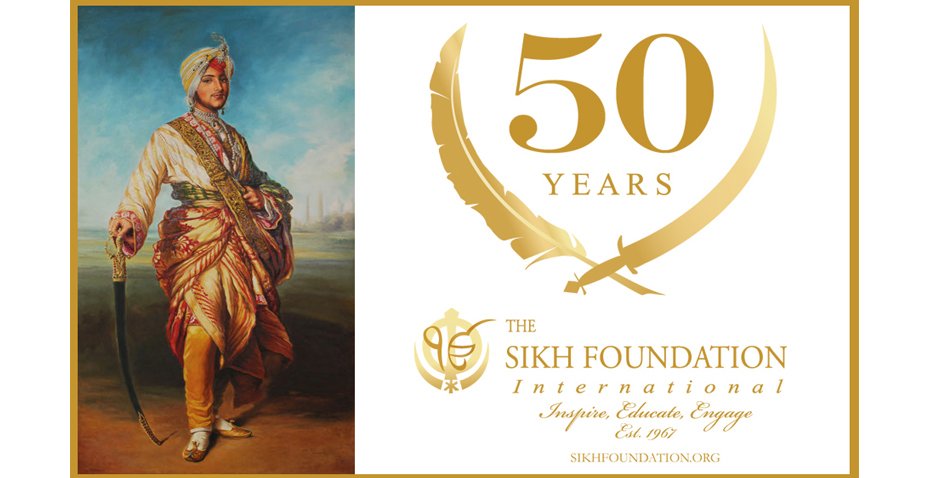 For the past five decades, the Sikh Foundation has carried out its mission of introducing Sikh arts, literature, and culture to the growing diaspora in the West as well as non-Sikh audiences around the world. In 2017 we commemorate our 50th anniversary with deep pride in our past and look to a future full of promise and opportunities.

Sikh heritage is full of marvelous contrasts that have withstood the test of time – Magnificent maharajahs and simple saints, intricate jewelry and lofty pavilions, fine miniatures and elegant portraiture. A religion that teaches simple living and service to the fellow man, Sikhism has nevertheless inspired beautiful art and architecture, both classical and contemporary.

Sikhism the fifth largest religion is the youngest of the major world religions. Guru Nanak, the founder of Sikhism, emphasized the humanistic principles of equality, social justice, and selfless service. The nine spiritual leaders who followed him built on his legacy to create a robust, activist faith that has thrived and survived persecution and emigration.

Sikh kings carried on this legacy, with the most successful and dynamic of those being Maharaja Ranjit Singh, during whose reign classical Sikh art reached its pinnacle.

After Britain annexed the Punjab in 1849, Sikh soldiers and explorers travelled widely across the world. In the Western hemisphere, they settled mainly in Canada and the Western United States, keeping their faith and customs alive.

Established on Dec. 27th 1967, the Sikh Foundation is dedicated to passing on this rich heritage to the diaspora in the West, and to create the space and resources for the academic and artistic study of the culture. For 50 years, the Foundation has been a champion for the recognition of Sikh heritage and values among audiences around the world.

Among its many achievements have been the display and creation of galleries and exhibits of Sikh art at prestigious museums, endowment of several chairs at California universities for Sikh and Punjabi language studies, and publications aimed at both Sikhs and non-Sikhs.

The Sikh Foundation begins its 50th anniversary celebrations on 5th May 2017 with “The Pride and Promise,” a Gala hosted at the Asian Art Museum in San Francisco, which houses one of the most comprehensive Asian art collections in the world. Among its prized galleries is the Satinder Kaur Kapany Gallery – the first permanent Sikh Arts exhibit in North America.

For our 50th anniversary, the museum plans to bring out its finest collections of Sikh art in a special exhibit – “Saints and Kings: Arts, Culture, and Legacy of the Sikhs” from March 10th to June 4th, 2017. It features treasures like the ornate helmets and armor worn by the Sikh royals, miniatures, textiles, contemporary Sikh etc.

Following a tour of the Sikh Exhibit and gallery, we gather for a grand banquet. Guests will get an opportunity to mingle with distinguished members of the community, including filmmakers, former heads of state, and business leaders, while partaking of an elegant sit-down dinner featuring regional cuisine. Vibrant performance pieces by artists-classical, contemporary, and fusion – are among the many highlights of the banquet.

The evening also features the launch of our newest publication “Sikh Arts in the Kapany Collection,” a joint publication with the Smithsonian Institute. As a very special thank-you to our guests, you will each take home a copy of this splendid volume featuring over 300 gorgeous, full-color representations of Sikh art.

Education is a very important part of the Sikh Foundation’s mission, and the 50th anniversary celebrations also feature a conference titled “Advancing Sikhs with Education” at Stanford University on 6th &7th May 2017. Attendees at the conference can look forward to talks on a wide range of topics such as Innovation, Public Service, Entrepreneurship, Arts and Literature by distinguished authors, artists, entrepreneurs, and business and political leaders from around the world.

The Sikh Foundation invites you to be a part of introducing an entire generation of young Americans to Sikh Art and heritage. For more information on attending the various events or becoming a valued sponsor please visit www.sikhfoundation.org/50years or email us info@sikhfoundation.org or call our office 650 494 7454.

· Conference: Advancing Sikhs through Education at Stanford University, CA, on May 6th & 7th, 2017.

· Art Exhibit: Saints and Kings: Arts, Culture, and Legacy of the Sikhs at the Asian Art Museum in San Francisco from March 10th to June 4th, 2017.